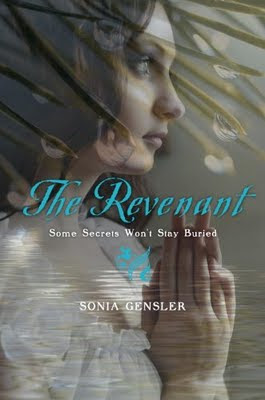 With The Revenant, which hits bookstores this week, debut author Sonia Gensler has crafted a historical fiction/paranormal romance page turner perfect for summer reading. Our heroine is seventeen year old Willie--a self-described liar and a cheat. Desperate to avoid having to return home to help her mother take care of her half-brothers, she fakes educational credentials to get hired as an English teacher at the Cherokee Female Seminary in Indian Territory.

It’s 1896, and Willie doesn’t know what to expect from her new position, but she certainly doesn’t expect to find a her pupils are mostly mixed-race, upper-class young Cherokee ladies who are much more sophisticated and privileged than she is. Nor does she expect the school to be shrouded in mystery--one of their students had supposedly drowned and now her classmates believe that the young girl’s spirit haunts Willie’s room. Willie doesn’t believe in ghosts, but she can’t explain the peculiar noises and the strange events happening at school. Could it be a revenant--one who returns from the dead?

She also doesn’t know what to make of her attraction to a handsome, charming young man, Eli Sevenstar, who’s a student at the nearby Cherokee academy for boys. Romance between an instructor and a student is surely prohibited, not to mention a romance with a native. But in the meantime Willie has to figure out how to grade all the English assignments she has given out, organize the students in a Shakespeare play, and solve a murder mystery--a hefty load for any proper young lady. Can she survive long enough to figure out her own destiny?

This book offers plenty of suspense and entertainment for fans of ghost stories, mysteries and the paranormal, with a good dose of history in the mix as well. My favorite element of the book was definitely the detailed historical setting. While I was familiar with the outlines of the Cherokee Trail of Tears, when the tribe was forced to move from Georgia to what is now Oklahoma, I was unfamiliar with the existence of a small group of wealthy Cherokees who signed a treaty with the Jackson administration and moved voluntarily to what was then Indian territory. An author’s note describes Gensler’s extensive research with primary sources at the Oklahoma Historical Society and Northeastern State University’s archives. This research provided accurate historical background, including depicting the tension on campus between Cherokee students of different economic classes. The main characters are highly appealing, and teens will enjoy the bit of forbidden romance as well.

Gensler’s website provides links to further information on the real Cherokee Female Seminary, which was staffed by graduates of Mount Holyoke and other Eastern colleges.


Disclosure: ARC provided by publisher.
Posted by Fourth Musketeer at 5:00 AM