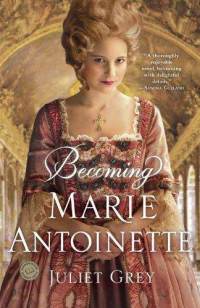 I am a bit obsessed with the tragic tale of Marie Antoinette, the epitome of the doomed Queen, and I'm clearly not the only one; her fascinating life continues to inspire novels, movies, and more.  The newest novel about her is the first in a planned trilogy by debut novelist Juliet Grey.  The first novel begins in 1766 at the court of Maria Theresa of Austria, the Hapsburg empress who was Marie Antoinette's mother, and ends in 1774 with the ascension to the throne of France of two teenagers, Marie Antoinette and her husband, Louis Auguste. The next book, "Days of Splendor, Days of Sorrow," is due out in 2012, with the third part appearing in 2013.

The book is narrated in the first person by Marie Antoinette herself, much like Carolyn Meyer's recent Young Royals treatment of Marie Antoinette, The Bad Queen, reviewed here at the Fourth Musketeer last year.  Grey establishes then Maria Antonia's happy childhood, frolicking with her many siblings at the Austrian court, which was much less formal than the etiquette-dominated splendors of Versailles.  When Marie Antoinette is matched up with Louis XV's grandson, her life changes even before her marriage; she is expected to be completely transformed in order to be suitable as the Dauphine and future queen of France, from her education to her hairline to her teeth (she was even given braces, which in the 18th century sounds like some kind of torture!).

Grey paints a very sympathetic portrait of the young Marie Antoinette, totally naive and unprepared for the intrigue of the French court, where she soon becomes a pawn in a game played by the king's maiden daughters (the "aunts") who conspire against the king's low-born mistress, Madame Du Barry.  With no real friends, no privacy, and little support from her awkward husband, Marie Antoinette is expected to dominate the intricate court life, guided by conflicting advice from her mother in Austria and the "aunts."  We can't help but feel sorry for this pampered princess, who enters France on her wedding voyage from Austria to the cheers and love of the French people but who later becomes the target of their hatred and vitriol.  How this transformation occurred with undoubtedly be covered in the next two volumes of this trilogy.

Although published for adults, this engaging book is suitable for teens as well, especially those with a strong interest in history. There is some frank discussion of sexual intercourse (or lack thereof, since Marie Antoinette's husband was unable to consummate their marriage for many years, much to the dismay of not only Marie Antoinette, but everyone at court, where everyone knew of the lack of activity in the marital bed).  My own teenage reviewer found the book "too long and too detailed," but otherwise "fun."  She gave it 3 out of 5 stars, mostly because of the length.

Grey includes a detailed bibliography of sources she consulted.
Posted by Fourth Musketeer at 5:00 AM