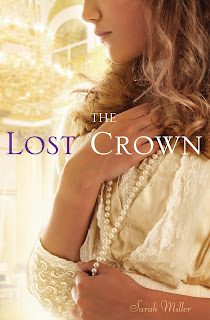 Recommended for ages 12 and up.
Like so many other readers, I am fascinated by stories of doomed princesses.  Sarah Miller’s new YA novel, The Lost Crown, about the last few years in the lives of the Romanovs of Russia, tells their story from the point of view of all four Grand Duchesses, the beautiful and privileged daughters of Czar Nicholas II.  Olga, Tatiana, Maria, and Anastasia, sometimes known as OTMA, each of them imbued with her own personality, narrate in alternating chapters how world war and revolution irrevocably changed their lives, robbing them not only of their privileged status but eventually of their lives as well.

In a recent interview, Miller was asked why the story of the Romanovs’ assassination has so much “staying power.”  She comments:


Think about the things that fascinate the public: celebrity, royalty, beauty, youth, power, wealth — and, of course, tragedy. One or two items on that list are enough to grab most people. The Romanovs can boast all seven. I suspect it also has a lot to do with the extreme contrasts in the story. There’s the riches-to-rags aspect, and also the incongruity between the irresistible appeal of Nicholas II’s personality and his ineptitude as a ruler. With the possible exception of the empress, the whole family was so guileless and personable that you can hardly help liking them even as they hurtle themselves toward their own destruction. Even their jailors were taken aback by the sympathy they developed for the Romanovs after observing them in person.
There’s just something enthralling about a senseless tragedy... it’s hard to quench people’s appetite for stories about the Romanovs, Anne Frank, and the Titanic. Things that never should have happened are hardest to let go of because we crave an explanation. That’s why the grand duchesses in particular have tremendous staying power. People can stomach the political necessity of executing the tsar, the empress, and maybe even the 13-year-old heir to the throne, but there was no reason for those four sisters to die. To top it off, so many photos have been left behind showing them vibrantly alive — dancing, swimming, rollerskating, playing tennis. That’s pretty much a recipe for immortality.

The book begins with the duchesses enjoying a glorious day on the imperial yacht, dancing, playing games, spoiling their lapdogs, and flirting with the handsome officers.  Their happiness is only tainted by the illness of their young brother, Aleksei--perhaps the most famous hemophiliac in history.  But soon they learn of the assassination of the Archduke Ferdinand in Austria, and war breaks out all over Europe.


The whole family throws themselves into war work; the Czarina herself and the two oldest daughters, Olga and Tatiana, are trained to nurse by the Red Cross, and the younger girls visit the wounded to cheer the soldiers.  The men are thrilled by the attention from the royal family, begging for photos and autographs.  But as the war goes badly for the Russians, dissent begins to grow, erupting in revolution and the abdication of the czar.  Soon the family is forced to leave their palace for house arrest in rural Tobolsk and finally imprisonment in Siberia, at Ekaterinburg, where their tale comes to its inevitably tragic and violent conclusion.

Miller works hard to create a distinct voice for each of the archduchesses, although I must admit that at the beginning I had trouble separating all but the youngest, Anastasia, who is portrayed as the impish jokester of the bunch.  Her book is impeccably researched, with original source material including the diaries and correspondence of the four girls, much of it still available only in Russian, used by the author in her attempt to create a balanced portrayal of the historical events and to create sympathetic young women that contemporary girls would identify with.

Russian names, with the language’s extensive use of nicknames, can be confusing to English readers, and the author therefore includes a cast of characters list at the beginning of the novel, which includes formal names, nicknames, and descriptions of each character in the book, so that readers can keep everyone straight.  Miller also includes a glossary of Russian words and phrases, which are scattered liberally throughout the text.  A brief epilogue describes the horrific assassinations in the cellar in some detail, as well as the rumors of survival of one or more of the imperial children that persisted for years after the revolution.  Back matter includes reproductions of both formal and informal photographs of the imperial family, an author’s note on her research, and an excellent bibliography, including on-line resources and films as well as an extensive selection of books on the Romanovs.

Some other novels for young people on the Romanovs that are worth reading include:

Note:  You may know Sarah Miller as the author of Miss Spitfire:  Reaching Helen Keller (Atheneum, 2007),  another excellent historical novel which tells the well-known story of Helen Keller from the viewpoint of her teacher, Annie Sullivan.  Her website includes links to all the best Romanov websites, as well as websites about Helen Keller and Annie Sullivan.  You can also access a number of interviews with her about The Lost Crown and her research about and interest in the Romanovs.
Posted by Fourth Musketeer at 11:46 AM

I have been waiting for this one. I loved her first book.