Nonfiction Monday Book Review: The Genius of Islam: How Muslims Made the Modern World,by Bryn Barnard (Alfred A. Knopf, 2011) 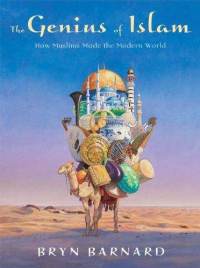 Kids definitely learn more about Islam today in the public school curriculum (at least here in California) than I did as a kid, but I don't think the curriculum includes the many fascinating facts explored in author/illustrator Bryn Barnard's new book, The Genius of Islam, an attractive, elegantly illustrated slim volume suitable for older elementary school or middle school children.

An introduction gives a brief introduction to Islam as "one of the world's great religions, one of history's most important civilizations, and one of the foundational cultures of the West."  Barnard stresses Islam as much more than an Arab religion, but rather a diverse culture which borrowed elements from other cultures and faiths and rewarded minorities in its midst, including Jews and Christians.  Barnard then addresses a number of areas in which Islam was particularly influential, including calligraphy, mass-produced paper, the introduction of what we now call Arabic numerals, architecture, astronomy, health care, agriculture, technology, optics, musical instruments (particularly percussion instruments), and translation of ancient writings.

Why are we not more aware of all these contributions?  Barnard explains that during the Renaissance, some influential European thinkers such as the 14th century Italian poet and scholar Petrarch resented the influence of "infidels" on Western philosophy and learning, and demanded that all Arab learning be expunged from European university education.  Indeed, Muslim philosophy was removed from European university curricula, and Europeans began to take credit for Muslim inventions.  Over centuries, Muslim contributions to Western thought were "barely a memory."

Barnard is an extremely talented artist as well as a capable writer, and the book is abundantly and attractively illustrated in full color.  Back matter includes suggestions for further reading as well as recommended websites.  Endpapers show maps of the Islamic World in 622-750 and 1500 CE.

One issue I had with this book is that since it ends at the Renaissance, it leaves the reader wondering whether the contributions of Islamic civilization ended then as well!  Nonetheless, this book serves as a worthy introduction to a fascinating subject, and would be an excellent addition to classroom and school libraries.

This one has been sitting on my 'to read' shelf. Besides all the 'stuff' invented by Muslims it's interesting to read about how history is written and why events can be forgotten. Great cover art, too.
Thanks for the recommendation.
Tammy
Apples with Many Seeds.

Thanks so much for participating in today's Nonfiction Monday round-up. This has been a neat experience for me (as a host for the first time)...and I've enjoyed 'meeting' the participants and finding new and interesting resources!