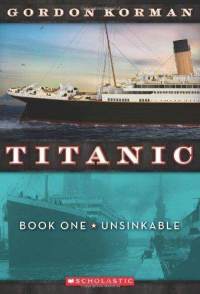 2012 marks the 100th anniversary of the sinking of the Titanic, and a slew of new books on the subject, both fiction and non-fiction, are due to be released in the coming months.  The senseless tragedy that was the Titanic is a source of endless fascination across generations, and the anniversary is likely to spur a flood of new interest among young people.

The well-loved and versatile author Gordon Korman, who has published many popular action-adventure trilogies for young readers (i.e. Everest, Island, Dive, and Kidnapped) is a natural to capture this story for a new generation of readers.  According to his blog, Korman has always been a Titanic buff, and in this series, he follows the adventures of four young passengers on the magnificent and supposedly unsinkable luxury ship's maiden (and only!) voyage.

Paddy is a petty thief and a stowaway, running away from gangsters who would like nothing more than to murder him for stealing money from them.  Sophie is the daughter of an American suffraggist, and is embarrassed when her mother is arrested and delivered to the Titanic by police for her illegal activities.  She meets a new friend on the ship, also traveling first class--Juliana, whose wealthy father seems to spend all his time gambling.  The fourth character of this quartet is young Alfie, who gets himself hired on as a steward, although he's underage, because his father is working as a stoker on the ship.  There's non-stop action in the story, as well as mystery, as the boys find a scrapbook filled with clippings about Jack the Ripper.  Could the real "Jack the Ripper" be hiding on the ship among the passengers?

Korman's trilogies are perfect for reluctant readers; volume 1 is a manageable 170 pages, and volume two, Collison Course, was just released August 1.  The finale, S.O.S., releases September 1, so fans don't have to wait long for the conclusion of the series.  There's lots of foreshadowing of the coming tragic events in this first book (i.e. Paddy hides out in a lifeboat, wondering why there aren't more of them).  Even if they know what happens to the ship itself, readers will be on pins and needles to see how our appealing young heroes and heroines fare when the iceberg strikes.  Are they among the lucky few that make it onto the lifeboats or will they go down with the ship?  We won't know until September.

In coming months I will be reviewing other Titanic novels, including Allan Wolf's upcoming YA novel, The Watch that Ends the Night, which will be released in October.
Posted by Fourth Musketeer at 5:00 AM

All three just showed up today in my Scholastic book order. I am looking forward to them- I have always loved books about the Titanic.

Gordon Korman's lost it as a writer.

I really liked this series! I've read book 3 because I found it out in a bookstore a bit early. I thought it was a good conclusion to the series.