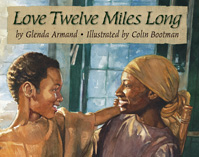 Based on the childhood of former slave, author and abolitionist  Frederick Douglass, this new picture book by debut author Glenda Armand introduces Douglass as a young boy in Maryland, where his mother visits him one night every week, despite the arduous twelve mile walk from the plantation where she works in the fields.  She explains to him that every mile represents something different, and she makes the journey go by concentrating on these aspects of her life during each mile of the journey.  For example, one mile is for forgetting, another for remembering, another for giving thanks, another for love. Armand is a teacher and school librarian who was inspired to write this story by a comment in Douglass' autobiography in which he remarks that his mother told him he was not “only a child but somebody’s child.”  More than a story about the brutality of slavery, this is instead of a story of a mother's deep love for her child, a universal theme that transcends Frederick Douglass' own story.  In fact, Douglass was separated from his mother as an infant, and she died when he was a small child.

The book is illustrated with beautiful watercolor paintings by Colin Bootman which capture the candlelit slave quarters with glowing light, as well as the quiet peace of the woods through which Douglass' mother walks on her trips.

This is not a picture book biography designed to be suitable for reports, although it could be used in conjunction with other books on Frederick Douglass for classrooms or homeschoolers.  It is also well suited to be read on its own and could spark a child's interest in other aspects of African-American history.  The book includes a brief afterword which gives additional details of Douglass' life after he escaped from slavery and his many accomplishments, including the fact that he gave his mother credit for much of his success.