Nonfiction Monday: Saga of the Sioux: An Adaptation from Dee Brown's Bury My Heart at Wounded Knee, by Dwight Jon Zimmerman (Henry Holt, 2011) 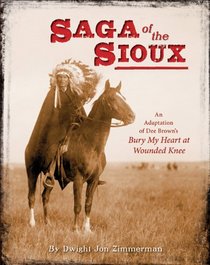 Unfortunately I've never read Dee Brown's iconic Bury My Heart at Wounded Knee, the best-selling history of the American West from the point of view of the Native Americans that was first published in 1971.  In this new book written for younger readers, Dwight Jon Zimmerman has adapted Brown's 500+ page book for a younger audience, adroitly simplifying but not "dumbing down" the complex and interwoven stories of the different Indian tribes in the original by concentrating on the Great Sioux Nation.  As Zimmerman explains in his preface, the Sioux's epic fight against the white man represents the struggle of all the Indian nations in many ways, and includes the stories of some of the most famous warrior chiefs in Indian history, among them Sitting Bull and Crazy Horse, as well as some of the most famous battles and events.

Zimmerman condenses and abridges Brown's work to concentrate on the Sioux' story, but also adds a first chapter providing background on the Sioux people as well as an epilogue discussing what has happened to the Sioux since the infamous massacre at Wounded Knee in 1890, and their attempts through the U.S. courts in modern times to get their sacred lands, the Black Hills, returned to them.

I must comment that I found this an incredibly difficult book to read; not because of complicated vocabulary or poorly written narrative, but because of the tragic nature of the material.  In fact, the book made me think about how many narratives of the Holocaust I have read, and yet how this tale of the white man's betrayal again and again of the Native Americans was so hard for me to digest.  That's perhaps a topic for another blog post, but even in stories (whether fiction or non-fiction) of the Holocaust there's a few good people who tried to rescue Jews or otherwise help them, whereas it doesn't seem like any of the white people appreciated the Indians' culture and lifestyle at the end of the 19th century.  Undoubtedly there must have been some more forward looking whites, but where were they?  Putting the Indian children into boarding schools to train them to be "white", it seems.

This narrative starts in the years leading up to the Civil War, in which the Sioux of Minnesota agreed in treaties to surrender nearly all their land, thus having to learn to farm like white men and depending on annuities from the government, and covers the story of the Indian Wars that ensued over the next thirty years.  Over and over again the Sioux were betrayed by the U.S. government, who would appear to negotiate treaties in good faith that they seemed to have no intention of keeping.  The narrative is magnificently illustrated with many full page photographs of various Sioux chiefs as well as American leaders, maps, as well as historic paintings and lithographs.  Zimmerman allows the Sioux leaders to tell their own stories, continuing Dee Brown's practice of including ample primary source materials (primarily oral histories).

Zimmerman concludes his narrative with the incredibly powerful quote that seems to sum up everything that happened to the Native population of this country from the time the white man first landed:

"They made us many promises, more than I can remember, but they never kept but one; they promised to take our land, and they took it."  --Red Cloud


This book includes abundant backmatter, including a timeline of Sioux history from 1851 to 1909, a glossary, information on the Sioux calendar, recommended reading, suggested websites, and an index.

I expect this excellent book to be nominated for many non-fiction awards; I would highly recommend it for upper elementary school through middle school, as well as for adults who would like an easy-to-follow overview of this shameful part of our nation's history.
Posted by Fourth Musketeer at 5:00 AM

What a wonderful premise for a YA book!

As the author of the adaptation, I was thrilled to read this review, because she completely understood what I was trying to accomplish. Thank you!