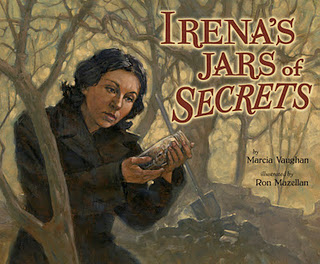 Irena's Jars of Secrets is the second picture book to come out this year on Polish heroine Irena Sendler, a young social worker who rescued over 2,500 Jewish children from under the noses of the Nazi guards in the Warsaw Ghetto during World War II (earlier this year I reviewed Irena Sendler and the Children of the Warsaw Ghetto, by Susan Goldman Rubin).  Both are well-written, worthwhile books, although they cover much of the same territory.

Irena's father, a Polish doctor, taught his daughter that if she ever saw someone drowning, she must jump in, even if she didn't know how to swim.  Irena took his teachings to heart, and when the Polish Jews were forced into the Warsaw ghetto, dying of starvation and disease, she knew she must do something to help.  Dressed as a nurse, she smuggled in food, medicine, and clothes, but that wasn't enough.  Soon she joined the Zegota, a Polish organization established to help the Jews, and started smuggling children out of the ghetto however she could--finding families that would take them in.  She kept careful records of the names of the children and where they went, so that they could be reunited with their parents after the war.  These important notes were hidden in small jars and buried under the apple tree in a friend's garden.

Irena's work was terribly dangerous, and she was eventually arrested by the Gestapo and sentenced to death.  Zegota members managed to rescue her through a bribe, and she continued to work for the resistance until the war ended.  Although Irena was able to retrieve her precious records, very few of the children were able to be reunited with their parents, most of whom had perished in death camps or the ghetto.  Still, relatives were able to be found for some of the children.

Irena's remarkable story was ignored in Poland until very recently, although she was honored in 1965 by Israel's Yad Vashem as one of the Righteous Among Nations, those Gentiles who helped Jews escape the Nazis.  She passed away in 2008 at the age of 98, but as author Marcia Vaughan concludes in her afterword, "her story of caring and courage lives on."

To learn more about Sendler, you may want to watch a documentary about Sendler's life entitled Irena Sendler:  In the Name of their Mothers, which was broadcast on PBS affiliates in May of 2011.  The documentary features some of Sendler's last interviews.