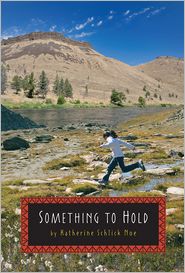 
In this new novel, debut author Katherine Schlick Noe tells a fresh and compelling story, based on her own childhood experiences of growing up on an Indian reservation as one of the only white families in the community.

When our eleven-year old heroine, Kitty, arrives at the Warm Springs Reservation in Oregon in 1962, she's used to being the new kid--her dad works for the government as a forest manager and they're always moving around.  But it's hard to fit in at the reservation school where she's one of the only non-Indians.  She doesn't feel comfortable with the white girls dressed in their fancy dresses and stiff petticoats whom she meets at church on Sundays either.  They dismiss all Indians as drunks, and their prejudice bothers Kitty deeply.  Even her teacher tells her that none of the Indian students are going anywhere, and that "they will drag you down if you let them."

The story, narrated by Kitty herself, takes Kitty through her first year living on the reservation, a year of growth and change for this sympathetic character.  As Kitty gets to know her classmates, she begins to appreciate them and their culture, as well as striving to understand the "dark shadows" in their lives, which are so much more complicated than her own happy two-parent family.  She even becomes friends with Jewel, the powerful and angry girl who once intimidated her, and is faced with the difficulties of keeping Jewel's secrets.  Should she speak out to help Jewel and her brother?

Something to Hold was recognized by Amazon as one of its best books for December for children.  Although the book discusses sensitive subjects, particularly prejudice and an abusive father, these difficult topics are always handled in an age-appropriate way, and in the end the novel is an uplifting coming-of-age story with appealing characters and an unusual setting.

Tomorrow, I am pleased to feature a guest post from author Katherine Schlick Noe about her new book!

Disclosure:  Review copy provided by publisher.
Posted by Fourth Musketeer at 10:18 AM

I reviewed this one through Amazon Vine - I LOVED it!

Looks so interesting! Nice twist! Thanks for the heads up. I think I might get for my oldest.