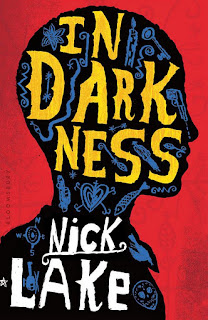 
Fourteen-year-old Shorty is in trouble--bad trouble.  One minute he's in the hospital recovering from a gunshot wound, and the next thing he knows, he's in the dark, buried alive in the rubble of the Haiti earthquake.  Shorty's grown up the slums of Haiti, in appalling conditions of incredible violence, gangs, drugs, poverty, and oppression.  But now he faces something even worse.

"In darkness, I count my blessings like Manman taught me.  One, I am alive.  Two:  There is no two."

To keep himself sane as he lies dying, Shorty relives his brief and troubled life, as he lies in a coffin of rubble, dreaming of water, surrounded by dead and stinking bodies, hearing people shouting for survivors, but unable to make himself heard.  He tells us about how he and his beautiful twin sister were delivered by Aristide himself, how his adored sister was taken from him by gangsters, how his father was brutally murdered in front of him.  His story is mixed up with that of politicians and well-meaning white relief workers who come to Haiti hoping to do good.  We see how a "good" kid who was bright and eager goes "bad," getting sucked into a cycle of violence by joining the gangsters who kill without mercy but also pass out food aid and pay school fees.

Lake merges into Shorty's story another tale of Haiti--one from long ago--the story of a slave named Toussaint l'Ouverture, who led the only successful slave rebellion in the 1790's--another tale of violence, brutality, carnage, revolutionary idealism, voodoo, and power.  As Shorty lies dying in the rubble, somehow his spirit mixes with Toussaint's and the two of them are connected on some mysterious spiritual level. Are they connected by the ancient stone that contains the spirits of the ancestors?  Will Toussaint's indomitable spirit help keep Shorty alive long enough to be rescued from the rubble?

This powerful and unforgettable story of both present-day and long-ago Haiti is a gripping story you will find hard to put down.  Not easy to read and digest because of the many violent and disturbing scenes, Lake nonetheless manages to jump back and forth with great ease between Shorty's first person account and the third-person story of the historical Toussaint L'Ouverture, peppering his narrative with creole words and phrases.  This is a stirring book that seems to capture the tragedy of Haiti.  I would recommend it equally to adults and to teens, and apparently in the UK the book is being published for both audiences.

The challenging nature of the subject represents quite a change of pace for British author Nick Lake, a children's book editor at Harper UK whose prior books were the Blood Ninja vampire trilogy aimed squarely at tweens.  Nick admits to a long-time fascination with Haiti that goes back to studying Creole at Oxford.  To learn more about Nick, check out this interview on Simon & Schuster's website and also the outstanding website for In Darkness, in which you can learn more about Haiti, Toussaint L'Ouverture, the Haitian earthquake, get suggestions for further reading, see a book trailer with an interview with Nick, find out how you can help in the ongoing recovery, and even more! A reading group guide is also available here.

I was surprised to discover how few books for young people have been published on Toussaint L'Ouverture, one of the most inspiring characters in the history of the New World.  Young readers might look for

There is also a well-reviewed documentary DVD available from PBS:  Egalite for All:  Toussaint L'Ouverture and the Haitian Revolution.  In fact, Toussaint's epic story seems made for a Hollywood movie; entertainment industry buzz indicates that famed African-American actor Danny Glover has been working for years on a biopic/historical epic about L'Ouverture, but no word on when that film will be coming to theatres.  However, a French two-part television film on the topic is due to air in 2012, but no word whether the film will come to American audiences.

On the subject of the 2010 earthquake, several picture books for younger children have been published, including Eight Days:  A Story of Haiti, by Edwidge Danticat (Orchard Books, 2010), in which another young boy is trapped in his house for eight days after the earthquake; and Hope for Haiti, by Jesse J. Watson, in which a young boy finds hope in a soccer ball after the devastation of the quake.  Several nonfiction books suitable for school and public libraries have been released on the topic as well, including:  The Earthquake in Haiti (Essential Events series) by Anne Lies (Abdo Publishing, 2010) and Earthquake in Haiti-Code Red, by Miriam Aronin (Bearport Publishing, 2010).

Lake is currently on a book tour in the States to promote In Darkness; if you're going to ALA Midwinter in Dallas, he'll be speaking at the USBBY talk on January 20.

Sounds like a powerful book that melds together Haiti now and then. I'm glad it's bringing attention back to Haiti and the plight of their people.