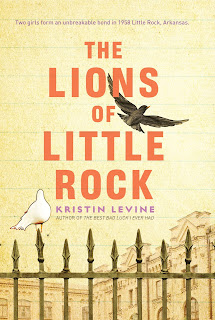 
Check back tomorrow (Friday) for an interview with The Lions of Little Rock author, Kristin Levine!


Some books introduce you to a really special character.  Kristin Levine has done that with the protagonist of her new novel, The Lions of Little Rock, twelve-year old Marlee.  Marlee is a brilliant math student, who dreams of becoming a rocket scientist (although she wonders if it's only boys who can have careers in math).  But at school, Marlee is painfully shy, and is so nervous she's scared of saying anything in class.  Not surprisingly, it's difficult for her to make friends.  It's 1958 in Little Rock, and Marlee's starting middle school.  Her older sister, Judy, should be attending high school, but the governor has closed the schools rather than have them be integrated, even though nine African-American students had enrolled the year before (the famous Little Rock Nine).

Things seem to be improving for Marlee when, much to her surprise, a new girl at school, Liz, comes to eat lunch with her and soon becomes her friend.  Liz and Marlee are even working together on an oral presentation for school, and Liz is helping Marlee gather the courage to speak in front of the entire class. But when the big day comes, Marlee is devestated to find out that Liz is not returning to West Side Junior High--and it's for a shocking reason.  It turns out that Liz is African-American, but has been "passing" for white.  When her identity is discovered, she must withdraw from school.

Although Marlee's mother is shocked by what she sees as Liz' betrayal, Marlee can't help missing her friend.  Can Liz and Marlee still be friends even though it's become dangerous for them to even be seen together?

This novel is an excellent pick for tweens and middle school students, exploring serious issues of prejudice within the context of a story of two girls' friendship that students that age will easily identify with.  The lions of the title live in the zoo not far from Marlee's house, and she hears them roaring sometimes at night.  But the title also refers to the courage that Marlee and Liz demonstrate by fighting the prejudice that was so much a part of their milieu in 1958 Little Rock.  Marlee even lies to her family to meet Liz secretly, not thinking that it might be dangerous for Liz and her family for the girls to see each other.  The secondary characters in this novel, including Marlee's sister, parents, and their African-American maid Betty Jean are just as skillfully drawn as the two protagonists, and enrich the story as well.  I would particularly recommend the book for mother-daughter or library book clubs, since the subject matter and the characters' response to their situations would make excellent material for discussion.


The Lions of Little Rock is also being released in audiobook.  Check out an excerpt here.

Sounds like a powerful book! Perfect for MLK Jr. day and for thinking about live before the Civil Rights Movement.