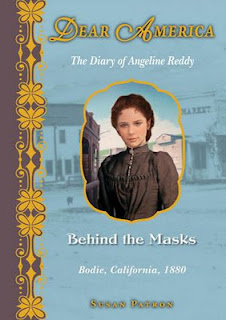 Newbery-award winner Susan Patron turns to the Wild West in the newest entry in the re-launch of Scholastic's popular Dear America series.  Set in the frontier town of Bodie, California, at the height of its  Gold Rush boom, this novel introduces us to plucky fourteen-year-old Angeline, who doesn't believe that her father, the town's criminal lawyer, has been murdered. In fact, she's willing to sneak into the town's funeral home to take a peek in the casket just to prove it's not him.  When her hunch proves right, she's the one who has to investigate the mystery this book revolves around:  just where is her Papa?

But it's not easy to get to the truth in this practically lawless gold rush town; Angeline is just plain "weary of the recklessness and danger of Bodie," a settlement filled with Chinese immigrants, saloons, brothels, miners, vigilantes, and a troupe of actors known as the "Horribles."   In order to find her father, she get some help from several friends, Ellie and Ling Loi, an American-born Chinese girl, Ling Loi, who's been raised in a brothel by the proverbial prostitutes with a heart of gold.  There's a hint of romance, too, between Angeline and an attractive bank-clerk-detective-actor, and even a ghost story revolving around a long-dead child.  The story is written in the first-person diary format of the other books in this series, but differs from other Dear America novels that I have read in that I would call it more of a mystery than traditional historical fiction.  The author provides plenty of colorful historical details of life in a frontier town, from the awful realities of a trip to the dentist to the petty small-town prejudices and gossip.  It's an action-packed, rip-roaring tale that should appeal to girls as well as boys and makes a good addition to school and/or public libraries.

Like all the Dear America books, this novel includes an epilogue of what happened to the characters and a section with historical notes about the town of Bodie in 1880, historical photos and maps. Back matter also includes a section on how to make a 19th century style mask from strips of muslin.  An author's note from Patron explains how she became interested in the history of Bodie after visiting the town, located near Yosemite.  The "ghost town," which at the height of its boom in the 1880's had 10,000 residents, is now a National Historic Site and a California State Historic Park.

Posted by Fourth Musketeer at 9:48 AM

I've never read the Dear America books ... is there a particular kind of girl who likes them? And/or if you like the American Girl book series, will the same child like these?