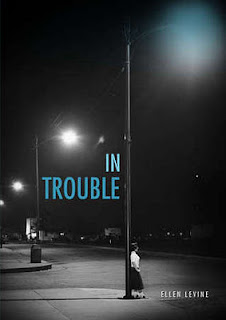 Recommended for ages 14 and up.
Abortion is a topic few YA authors dare to broach in their books, and this reality alone would be enough reason for me to applaud award-winning author Ellen Levine's 2011 young adult novel In Trouble.  But the book has plenty of merit as an unsentimental look at the hard choices (or lack thereof) teens confronted when they became pregnant in the 1950's.
The film noir style cover, portraying a lonely teenaged girl waiting late at night on a deserted street, sets the stage for this dark novel set in 1956 New York, when choices for young girls who got themselves "in trouble" were limited indeed.  The author tells the story of best friends Jamie and Elaine, who both find themselves with unwanted pregnancies while in high school.  However, the pregnancies are ultimately dealt with in very different ways, with a sensitive portrayal of how two different families dealt with this difficult situation.
Note:  some spoilers....
Elaine has a steady boyfriend already in college, and is sure that he will marry her when she tells him about the pregnancy.  Jamie's circumstances, on the other hand, are slowly unveiled by the author through a series of nightmares as the reader realizes that she was date-raped by a friend of her sophisticated Manhattan cousin.  Jamie's family is already under plenty of stress, since her dad has just been released from prison, having been convicted for refusing to answer questions during the McCarthy hearings.  But when they discover her circumstances, her family steps up, even helping her find a doctor who will do an abortion, despite abortions being illegal at the time.  Elaine, on the other hand, is sent to a home for unwed Catholic girls, where she is pressured to give up her baby for adoption despite her wishes.
In Trouble is based on dozens of interviews Levine conducted, and although the characters are fictional, each event in the book actually happened to someone.  In an author's note, Levine explains why she felt compelled to tell Elaine and Jamie's stories.  "If we don't know what has happened, we can't appreciate our choices today and what we might lose if laws are changed," she writes.  She explains that although we might think things are totally different today, with the availability of legal abortion, in 87% of U.S. counties you can't get a legal abortion, because there's no doctor who will do it.
I believe this is an important novel for young people, particularly girls to read; unfortunately, I'm not sure it will be widely purchased by school and public libraries.  Despite the fact that Levine has won many awards for her work, including a Caldecott Honor for Henry's Freedom Box, few of the library systems in my area (Southern California) have purchased it, although the novel came out in September.  Whether this is because of the controversial subject matter or limited budgets, I can't say, but I hope librarians will not be reluctant to add this to their collections because the book deals with abortion.  It is a gripping story that deserves to be on the shelves.
Posted by Fourth Musketeer at 5:00 AM

Interesting that you haven't seen many libraries in the area add this to their collections-- I bought it for my library! But to be honest, I seem to remember it getting lukewarm reviews. So maybe that's why you haven't been seeing it in many library collections? As you noted, budgets are so tight...

Anyway, since I did order it, I'm really glad to hear you thought it was worthwhile!

Wow, a bold choice for a YA book topic indeed but sounds fascinating! Are any political groups freaking out about this book and threatening to ban it?

Ever watched live sex cams? You will not forget BongaCams.