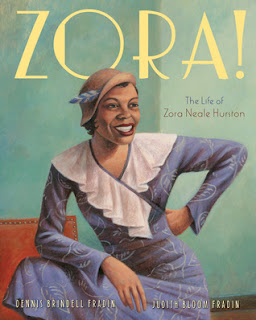 
Although I haven't read any of Zora Neale Hurston's original work, I was fascinated by this upcoming biography for young people of the celebrated African-American novelist of the Harlem Renaissance.  Written by veteran nonfiction writer Dennis Fradin (he's published over 200 nonfiction books!) and his wife Judith, this book tells the story of an extraordinary woman who knew she was special from an early age.  She grew up in the unique all-black town of Eatonville, Florida, where she was unaware of racism and grew up so self-confident that she believed the moon followed her wherever she went.  From her childhood on, she loved to tell stories, and had a wonderful imagination.

While a student at Howard University, Zora was accepted into their literary group and had her first work published.  From the beginning, her work featured realistic dialogue, with the characters speaking in a dialect modelled on the real people she had grown up with.  When she was in her thirties, she moved to New York City to try to make it as an author, with $1.50 in her pocket, "no job, no friends, and a lot of hope."  There she befriended important writers such as Langston Hughes and became recognized for her work as an anthropologist as well as a writer.

The book points out that despite the recognition she received during her lifetime for her books and folklore work, Zora remained poor, and even had to take a variety of "day jobs," including work as a librarian, maid, personal assistant, waitress, college drama teacher and even as a Hollywood script consultant.  By the end of her life in 1960, all her works were out of print; in the 1970's, they were rediscovered by a new generation of African-American writers, including Alice Walker, and her books have now been republished.  In fact her most popular work, Their Eyes Were Watching God, has sold more than 5 million copies, and is used in many high schools as part of the curriculum, as well as being made into a movie produced by Oprah Winfrey and starring Halle Berry.

This is a great biography to recommend for kids from 9-14 years old, and provides plenty of information for those school biography reports.  Her incredibly varied life, in which she achieved some fame, but little financial success, is a remarkable testament to her persistance and her spirit, and the book does an excellent job of portraying the different sides of her life, both the complicated personal (she was married and divorced three times) and professional aspects aspects of her story.

The book is abundantly illustrated and also includes many quotes from Zora Neale Hurston's own writings, which give the text a real flavor of the author particularly for young people who may not read her books until high school.  Back matter includes an excerpt from one of her folktale collections, a timeline, source notes, and a bibliography.

I was so glad to learn about this book. Zora Neal Hurston is one of my favorite authors ever since I read Their Eyes Were Watching God in college!