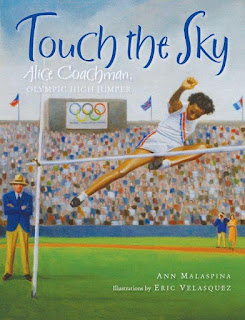 Recommended for ages 5-10.
Young Alice Coachman, growing up in segregated Albany, Georgia, in the 1930's, just couldn't help herself.  She wanted to soar and touch the sky.
"Bare feet shouldn't fly./Long legs shouldn't spin./Braids shouldn't flap in the wind./'Sit on the porch and be a lady,' Papa scolded Alice," this book about the future Olympic athlete begins.  When she watched boys doing the high jump at a track meet, "Alice's feet tingled, wanting to try."
We see Alice's dreams growing bigger as she gets older, until finally the high school coach needed a jumper for a track and field tournament in Alabama.  Her family was too poor to afford proper clothes for the competition, so her teachers pitched in and bought her shoes, shorts, and bright white socks.  For the first time, she competed with the best black athletes in the South.  In 1939, she won her first national medal, and soon she was asked to enroll at Tuskegee, where she'd be able to train with the best.  Alice worked hard to pay her school fees.
Alice dreamed of the Olympics, but with the world consumed by war there were no games to enter.  Could she still compete in 1948?  Would she achieve her dream of a gold medal in the high jump--and  finally touch the sky?
Written in a simple yet poetic style, this book captures the spirit of a true American heroine and a pioneer in sports, one who is not widely known today.  It's a real "girl power" story, as well as a tale about overcoming prejudice.  The stunning large format oil paintings, by illustrator Eric Velasquez, with their vibrant colors and sweeping compositions, capture the intensity of Alice's story, and especially of her jumping.
An author's note shows photographs of the real Alice and her teammates and tells about what happened to Alice after her triumph at the Olympics.  A bibliography is also included.
Posted by Fourth Musketeer at 9:23 AM

Thank you for the nice mention of Alice's story and Eric's fabulous art!