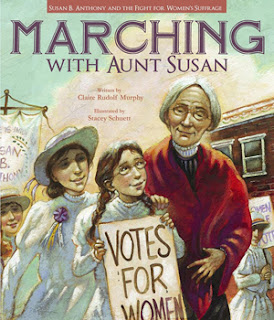 
In this historical picture book published in 2011, the 100th anniversary of the establishment of women's suffrage in California, author Claire Rudolf Murphy imagines the girlhood of Bessie Keith Pond, a real ten-year old girl who lived in Berkeley, California in 1896, the first year that a referendum on women's suffrage was on the California ballot.

All Bessie wants is to go hiking with her Papa and her brothers, but when they leave without her, she gets a chance to meet a famous guest at her home--the elderly Susan B. Anthony.  "Aunt Susan," as she's called by all the women in attendance at their tea, is in California for a women's suffrage rally in San Francisco.  Bessie's so inspired by Susan B. Anthony's speech that she recruits her friend Rita to come with her to work at suffrage headquarters, writing letters, licking envelopes, and painting posters.  Bessie soon learns that there's lots of things besides hiking that girls aren't allowed to do.  Although suffrage did not succeed in that referendum, the book ends on a hopeful note as Bessie's Mama learns to ride a bicycle--a symbol of freedom for women, and Papa decides to take Bessie hiking after all.

Illustrator Stacy Schuett's vibrant illustrations, rendered in gouache on watercolor paper, greatly enhance the narrative.  The book is supplemented with extensive back matter, including an author's note, further information on Bessie Keith Pond, the California suffrage campaign, Susan B. Anthony, and suffrage history.  A bibliography of further resources for young readers, including web resources, is also included.  The endpapers are illustrated with a variety of historical newspaper clippings and other historic materials which readers can peruse.

Marching with Aunt Susan is a perfect book to share during Women's History Month, and was honored by the Amelia Bloomer Project as a 2012 pick on their recommended feminist literature for children list.

To learn more about Marching with Aunt Susan, check out Claire Rudolf Murphy's post on Kidllit Celebrates Women's History Month. about "My Hero, Susan B. Anthony."

Giveaway:  You can also enter to win a copy of this book, and a prize pack of a number of other new titles for Women's History Month, by leaving a comment on any post on that site!