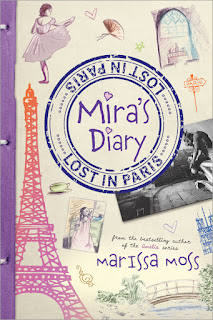 Author-illustrator Marissa Moss has two excellent new historical fiction novels for young people out this fall:  Mira's Diary: Lost in Paris and A Soldier's Secret.  Today I will be reviewing the first of these, and a review of the Civil War historical thriller A Soldier's Secret will be coming next week in my blog.

In Mira's Diary, Moss creates a time travel story melding the exciting artistic world of 19th century Paris with the shocking political intrigue and anti-Semitism of the infamous Dreyfus affair.  Although the Dreyfus affair is well known to those interested in French history, it's certainly not a topic most young people in the U.S. will be at all familiar with, and I applaud Moss for choosing to set her story around this important tale of corruption and scapegoats.

Our story begins when young Mira receives a strange postcard of a gargoyle from Notre Dame in Paris from her mother, who has been missing without any explanation for many months.  Not only is the black and white postcard very old-fashioned looking, so is the faded French stamp.  And "who sends postcards anymore?," wonders Mira.

With the postcard their only clue, Mira, her father, and her 16-year old brother take off to Paris, hoping to find her mother.  They check into a quaint hotel in the Marais, Paris' historic Jewish quarter, before going off to explore the famous cathedral.  Mira can't help looking everywhere for her mother, but it's not until she touches a gargoyle on the top gallery of the cathedral that she realizes she's been looking in the wrong century!  Magically transported to April, 1881, Mira not only befriends a good-looking young man who turns out to be an assistant to the famous French artist Degas, she also finds herself embroiled in the Dreyfus affair, a political scandal that involved the French army and virulent anti-Semitism in the French military and society at large.  Mira spots her mother several times, and receives several mysterious and secret notes from her.  It's clear that her mother is in danger, and Mira must step up to try to keep Dreyfus, a Jewish army officer, from being unjustly punished as a traitor.

This novel manages to mix very serious topics such as prejudice and anti-Semitism with an up-close look at late 19th century Parisian artistic life, letting us visit Giverny, Montmartre, the Impressionists Exhibition, and Parisian salons populated by famous artists such as Degas, Monet, Seurat, and Mary Cassatt.  Moss even throws in a hint of romance between Mira and Degas' handsome young assistant Claude.  Although readers will learn a lot about history and art through this book, they will also be entertained by the suspenseful story featuring a likable heroine who finds herself in a difficult--and certainly unusual--situation.

In the manner of her Amelia's Notebook series and her historical journals, Moss gives this new book the feel of a real journal or diary, from the cover with its mock journal binding to the charming small pencil sketches distributed liberally throughout the novel and the endpapers decorated with Mira's notes to herself, a map of France, and French vocabulary.

An extensive author's note provides a detailed explanation of the complexities of the Dreyfus affair (geared for tween readers) and the military corruption and anti-Semitism it exposed in 19th century Paris.  Moss also provides brief notes on Paris in the late 19th century, the impressionist art movement, and author Emile Zola, who wrote the famous "J'accuse" newspaper article in favor of Dreyfus.   A bibliography lists other resources and books consulted by the author.

It sounds like a really interesting read and I like the time travel aspect to really make it seem real.