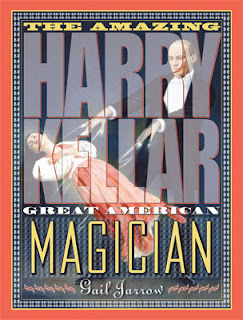 There are so many books about Harry Houdini for young people.  I was delighted to discover this new, immensely readable and attractive biography of a contemporary of Houdini's, Harry Keller, equally or even more famous during his lifetime than Houdini but known these days only by insiders in the magic community.

Jarrow traces Kellar's life and career, which spanned half a century and five continents.  After running away from home at the tender age of 10, he winds up living with a minister who wants to educate him to become a preacher.  After attending his first magic show, however, Harry wanted nothing more than to go on the stage himself, and managed to get himself a job as a magician's assistant.  His magic career took him all around the world, traveling by ship, train, stagecoach, or even on the back of a mule.  Renowned for his elaborate illusions, variants of which are still performed today in Las Vegas magic extravaganzas, Harry never rested on his laurels, but was always looking for new and even more amazing illusions for his shows.  Many of these fascinating illusions are described and pictured in this biography.

Special kudos go to the designer of this large format, full-color book, which incorporates many of Kellar's original posters, as well as fonts in the text that echo the look of the antique posters.  Kellar's posters often featured him with devils and imps, thought to be the source of the magician's incredible powers.  The book features many contemporary photographs as well as sidebars about diverse topics touched on in the text, such as magic history, spiritualism, and entertainment in Kellar's time.  Back matter includes a timeline, source notes, a comprehensive bibliography, an index, and a list of resources such as websites, magician organizations, and DVD's.

Of course, this book is a sure winner for kids--and even adults--interested in magic and the history of the theatre in general.  But its appeal should be much broader.  It's a terrific book for leisure reading for young people who prefer nonfiction, and also provides plenty of facts for school biography reports.
Posted by Fourth Musketeer at 5:00 AM

Email ThisBlogThis!Share to TwitterShare to FacebookShare to Pinterest
Labels: biography

I am in temporary possession of this book which Ill be giving away via an E-newsletter sometime in the near future.

I agree. It's highly readable, beautifully designed and so enlightening! Just fab!

Looks great! I pinned it!

Can't wait to read--kids love a history of magic (and I do, too!) Thanks for finding great nonfiction. We need more of it.
Best,
Jewell