Book Review: The Time-Traveling Fashionista at the Palace of Marie Antoinette, by Bianca Turetsky (Poppy/Little Brown, 2012) 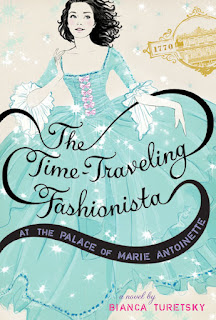 In the second in her series about a fashion-obsessed middle-schooler who time travels by trying on vintage clothing, Bianca Turetsky turns to the court of Marie Antoinette, who was truly a fashionista before the word was coined.  Louise, our heroine, is once again invited to a vintage sale by the Traveling Fashionista, the same store she visited when she mysteriously time-travelled to the Titanic's maiden--and only--voyage.

Louise's father, an attorney, has recently lost her job, and now Louise can't go on her French class trip to Paris.  But no worries--Louise is about to have a much more exciting adventure than a class trip.  When Louise visits Marla and Glenda's mysterious vintage shop, which is located on a street that doesn't appear on any maps, she tries on a delicate blue satin ball gown, a genuine Rose Bertin.  Although the designer's name means nothing to Louise, Rose Bertin was dressmaker to Marie Antoinette, and as soon as Louise tries on the gown, she is magically transported to Versailles.  There she becomes Gabrielle, the Duchesse de Polignac, and the dear friend of a pretty blonde teenager that Louise soon figures out is the doomed Marie Antoinette.  Can Louise open Marie Antoinette's eyes to the suffering of the French people, and maybe save her life in the bargain?  And will she be able to get back to the 21st century in her magic dress?

I loved the premise of this book, since my #1 time-travel destination would be to the court of Marie Antoinette, but I could not help but be disappointed in many aspects of the execution.  Marie Antoinette was indeed the "Queen of Fashion" (see the excellent biography by historian Caroline Weber, Queen of Fashion: What Marie Antoinette wore to the Revolution), and in that sense a trip to her court is a perfect match for this fashionista series.  But I was troubled how Turetsky plays fast and loose with historical timetables, which bothers me in historical fiction, particularly for kids, where they might not know the historical facts.  For example, although no date is given, Louise remarks that Marie Antoinette is not much older than she is, so we can assume it takes place around 1770 --the year she marries the heir to the French throne, Louise-Auguste.  Turetsky repeatedly refers to Marie Antoinette's husband as Louis XVI, although he didn't take on that title until the death of his grandfather, Louise XV, in 1774.  She also has Louise turn into the Duchesse de Polignac, a very close friend of Marie Antoinette, but one whom she didn't even meet until 1775.  Also, Marie Antoinette is depicted as being unpopular with the French people, a development that happened much later in her reign.  And when they visit Marie Antoinette's dressmaker, they come home with boxes full of clothes, which were all made to order in those days.  Perhaps some of these details are cleared up by the author in a "Historical References" section, which did not appear in my advance copy, but I think if the author wanted to include some of these characters and events that take place closer to the French Revolution, she ought to have set the story a bit later, to keep the historical timeline more accurate, even if that would have made Louise and Marie Antoinette not quite so close in age.

An element of the book that I very much admired are the abundant fashion illustrations, done by fashion illustrator Sandra Suy.  They will be in full-color in the final version, although I had to make do with black and white in my advance copy.  The style reminded me very much of the vintage Barbie illustrations from the late 1950's and early 1960's, and fit very well with the Rococo style of the 18th century clothes.

Despite my criticism of the historical misrepresentations in this book, I do think that tween girls will enjoy this time travel adventure.  For those tweens who want to learn more about the endlessly fascinating Marie Antoinette, I would recommend the recent book by Carolyn Meyer, The Bad Queen:  Rules and Instructions for Marie Antoinette, a perfect match for that age group.

My daughter loved the first of the series...undoubtedly, she will be reading this as well!! (thanks for making not of the historical inaccuracies.).

The post is a book review of Time travailing fashion ist. Read to know more

Well somehow I got to read lots of articles on your blog. It’s amazing how interesting it is for me to visit you very often.