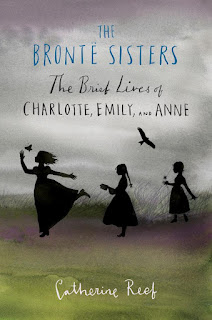 The two most famous works by Charlotte and Emily Bronte--Jane Eyre and Wuthering Heights--are classics of English literature, and have been frequently adapted for the movies and television as well.  But the lives of their authors, and of their sister, Anne, author of Agnes Grey, are perhaps not as well known, especially to young readers.  Author Catherine Reef, who published the very well-reviewed biography for young people Jane Austen:  A Life Revealed, in 2011, has turned her attention to the tragic lives of the Brontes in her newest work.

Reef's writing style is easy to read, with a narrative flair that makes the Brontes lives read much like a novel.  The biography opens when their father, Patrick, a country minister, was left to raise six small children when his wife died soon after the birth of their youngest, Anne.  Although he hoped to marry again, and proposed to several women, "none wanted a husband with a small income and a large family."  The children grew up in the wilds of Northern England, exploring the moors.  Because the children had only themselves for playmates, they developed an elaborate fantasy universe, complete with imaginary lands acted out by a set of toy soldiers.

The 19th century had few options for "respectable" women, and with no dowries for his daughters, Patrick Bronte sent his daughters to train to be teachers so they could provide for themselves after his death (ironically he outlived all six of his children).  When the two eldest die of tuberculosis, caught at the horrible school they attended, the surviving girls and their brother Branwell were educated at home, where they studied the classics as well as contemporary 19th century Romantic poets like Byron and Wordsworth.

All of the Bronte siblings were deeply creative, from Branwell, an artist who was ruined by drink and opium addiction, to the women, who were all talented writers.  However, women were not meant to be authors in the 19th century, and all were forced to publish their works under male pseudonyms.  Charlotte, under the name Currer Bell, was the first to be published, with Jane Eyre, in 1847.

In the course of this group biography, Reef provides summaries of the Brontes' major novels, including the lesser-known Agnes Grey as well as analysis of their novels' themes, historical importance, and current interpretations.  She also situates the novels in the context of women's history, stating that Charlotte Bronte "had written frankly about a women's feelings at a depth no other writer had yet explored."  Reef also writes especially movingly about the terrible year of 1849, in which Branwell, Emily, and Anne all die in eight months, leaving their sister Charlotte as the only survivor of the original six children.  She, too, was destined to meet an early and tragic death; not long after getting married, and finally knowing a brief period of happiness, she too, died, at the age of 38.

This well researched book is abundantly illustrated with photographs, portraits, and illustrations from the Brontes' novels.  Back matter includes a detailed bibliography, end notes, and index, and a list of the works of Charlotte, Emily, and Anne Bronte, including references to published editions of their letters and their childhood writings.

The brief length (190 pages) and accessible style of this biography make it eminently suitable for school and public libraries, where it could be a useful resource for school reports.  Although the length means that readers don't get an in-depth portrait of any of the Brontes, the book is a well done introduction that may spark further reading among young readers.

Readers, what is your favorite adaptation of a Bronte novel?  Leave a comment below.  Wuthering Heights alone has been adapted more than 30 times for film, TV, radio, and even opera.  My favorite adaptation is the Jane Eyre miniseries done for Masterpiece Theatre in 2006, starring Ruth Wilson and Toby Stephens.  Much better than the 2011 movie, which had to leave so much out!  Check it out on DVD from Netflix or your local library.  And watch for a new version of Wuthering Heights to be released this fall, the first time Heathcliff is depicted by a black actor.  I can't wait to see that one!

Wow, I had no idea that their own personal story was so sad!