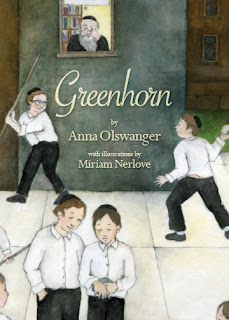 There is no shortage of stories about the Holocaust for young people, whether fiction or nonfiction.  Greenhorn, by author and children's book editor Anna Oswanger, strikes a different chord than most of these works by focusing on the aftermath of the war, through the story of one of its young survivors.

Although published as a free-standing book, Greenhorn, at 43 pages, is really more of an illustrated short story.  Set in an Orthodox yeshiva in Brooklyn in 1946, the story tells of the arrival at the yeshiva of twenty orphaned Polish boys, including young Daniel, who won't let go of a little tin box he carries with him everywhere.  Daniel rarely speaks, but Aaron, whose father is a rabbi, considers him his friend.  Aaron stutters and is made fun of by the other boys, and feels some connection with the nearly silent refugee when the yeshiva boys start teasing Daniel about his box that he carries with him and even sleeps with.  What's in the box, everyone wonders?  The horrifying reality of what Daniel is carrying around contrasts with the innocence of the children at the yeshiva, who are concerned with baseball, basketball, candy, and other normal kid pursuits.  We learn that inside the box is a greasy piece of soap, made with fat from the bodies of Jewish prisoners.  Daniel clutches to it believing it could contain a piece of his mother, of whom he has not even a photograph.

An afterword explains that this story is based on a real incident in the life of Rabbi Rafael Grossman.  A glossary provides explanations of Yiddish names, words and phrases used in the text.

Although this looks by the cover, the slight size of the story, and the abundant illustrations like a book for young children, I would not recommend this book for children younger than twelve.  Also, some background knowledge of the Holocaust is useful for understanding the implications of the story.   The story would make a good addition to a unit on the Holocaust, and could easily be read aloud in a classroom or read by individual students and used for classroom or home discussion.  The Holocaust is such a vast tragedy that sometimes it is difficult to imagine the scope; this small book brings one element of a survivor's story vividly to life for young people.
Posted by Fourth Musketeer at 5:00 AM

Your book review is so moving and you are right about the importance of new books that bring the Holocaust to light from a perspective that kids can relate to. I'm working on a Holocaust books list for kids and will include this book and a link to your post.