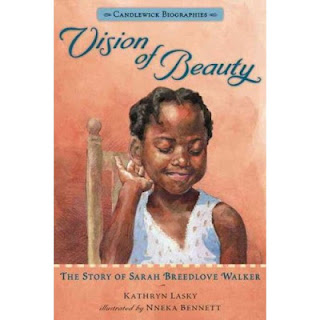 Candlewick Press has recently reissued in paperback Kathryn Lasky's biography of Sarah Breedlove Walker, originally published in 2000.  In a brief 48 pages, Lasky chronicles the life of this remarkable woman, born into poverty to former slaves, who became a highly successful entrepreneur and philanthropist.  Orphaned at the age of seven, Sarah had a difficult childhood, and married at the age of 14 to escape living with her sister and her cruel husband.  She eventually moved to St. Louis where she worked as a laundress and diligently saved to be able to give her daughter the education she never had.

Because of poor nutrition, Sarah's hair began to fall out, and she began to work on a formula that would produce healthy hair for African-American women.  After testing her products on herself, she began selling door-to-door, and eventually expanded her products into the Madam C. J. Walker Manufacturing Company, a business empire which made her the wealthiest black woman in America.

In a brief, easy to read narrative, Lasky hits on the highlights of Walker's life, emphasizing how remarkable her success was in an era when she had two strikes against her--being female and being black.  My favorite scene in the book involves Waker attending a conference of African-American business leaders, all of whom (of course!) were men.  Lasky describes how Walker tried unsuccessfully to get the attention of Booker T. Washington, so that she could speak.  She finally sprang to her feet, relating how she came from the cotton fields of the South, promoting herself into the business of manufacturing hair goods.  "'My object in life is not simply to make money for myself, but to use part of what I make in trying to help others,' continued Madam Walker...With these words, Madam Walker proved herself more than equal to any man in that room."

An epilogue describes Walker's commitment to philanthropy and to civil rights; her dying words were "I want to live to help my race."  Back matter also includes an illustrator's note an index, and selected sources.

Abundantly illustrated with beautiful full color watercolor paintings by Nneka Bennett, Lasky's book is an inspirational tale that could be read aloud or read independently by children in elementary school.
Posted by Fourth Musketeer at 9:11 AM

Another interesting sounding biography. Thanks for your recommendation and taking part in today's Nonfiction Monday event.
Tammy
Apples with Many Seeds

I have this book on my TBR pile. I'm looking forward to blogging it next month in Woman's History Month. Thanks for whetting my appetite with the review here!

I had heard of this story but I never knew her name or her real story. It was great to know there is a book on her now! Thanks for the review! So perfect for Black History Month!