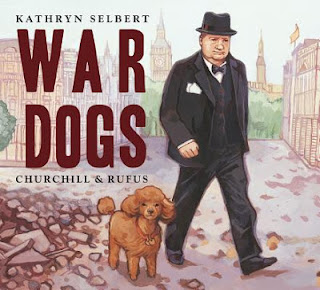 
Winston Churchill was known during his lifetime as the British Bulldog, due to his famous tenacity.  In addition to being a great statesman, writer, and orator, Churchill was an animal lover, but it was not bulldogs who lived alongside the famous man, but miniature poodles.

This new picture book by debut author/illustrator Kathryn Selbert tells the story of the British home front by highlighting Churchill's relationship with his poodle, Rufus.  The author opens with the following:

"Rufus's best friend, Winston Churchill, is a busy man, but most days Rufus and Winston share a walk."

It's 1940, and Winston is managing a nation at war.  Through the eyes of Rufus, Churchill's faithful brown miniature poodle, we see Churchill at work, visiting his secret underground bunker, the room from which he directs the war, going to the House of Commons, walking through streets filled with rubble from buildings destroyed by Nazi bombers.  Rufus is not always invited along however; when Winston meets with his allies, Franklin Roosevelt and Joseph Stalin, to plan D-Day, Rufus sits by the door, patiently guarding the bunker.  Rufus is once again by Churchill's side as the war ends, barking and howling with happiness.  In the end, Rufus and Winston retire to the country, resting..."two war dogs."  In the final lovely two-page spread dominated by the greens of the English countryside, Winston and Rufus gaze out to the horizon, with the country finally at peace.

Back matter includes a timeline of World War II, a look at Churchill and his affection for poodles (he owned two during his lifetime, both named Rufus), and a brief biography of Winston Churchill himself.    The author also includes books for young Churchill fans, Churchill and World War II-related websites, a bibliography, and quotation sources.

Acrylic and collage illustrations have an nostalgic yet realistic look, with plenty of sepia tones suggesting a time long ago.  Each two-page spread features a quotation by Churchill on a yellowed piece of paper, in an old-fashioned typewriter-style font, designed to look like it has been pinned to the rest of the picture. An interview on the Charlesbridge website indicates that this book grew out of an undergraduate school project, but that the book originally focused more on the relationship between dog and owner, and less on the historical details.  The book now provides more of an introduction to World War II, one that would be a good classroom read-aloud while studying that time period.  The book will, of course, capture the heart of dog lovers as well as history lover, with its illustrations that depict Rufus in all his poodle splendor.

Disclaimer:  I am a poodle owner and a poodle lover.  Review copy provided by publisher.

That's a great angle for grabbing children's attention - dog books are so popular! Fascinating to see Churchill from Rufus's POV.

I had no idea Winston Churchill was a dog lover, no less poodles!! What a great way to learn about history for kids!