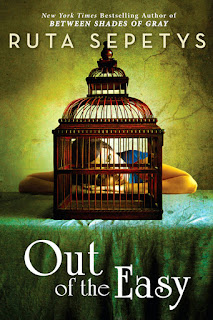 The prostitute with the heart of gold is a popular trope in fiction--although not one that we see often in YA novels, particularly with their focus these days on the supernatural and the dystopian.  Ruta Sepetys, who won so many honors with her first novel, Between Shades of Gray, (no connection with the even bigger best-seller, Fifty Shades of Gray!) transports us to 1950 and the seedy world of New Orleans' brothels and gangsters in her new just-released novel, Out of the Easy.

The book, narrated by the protagonist, 17-year old Josie, begins:  "My mother's a prostitute.  Not the filthy, streetwalking kind...But she sleeps with men for money or gifts, and according to the dictionary, that makes her a prostitute."  Her mother works for Willie, based on an actual New Orleans madam of the time, and her on and off boyfriend is a nefarious gangster, Cincinnati.  Josie hates Cincinnati and has a difficult relationship with her mother as well.  Willie, the generous madam with the proverbial heart of gold but a tough exterior, takes on the role of mother-figure for Josie, while her own mother seems to have little patience for raising her.  Josie's made good grades in school, and lives above a bookshop where she works part-time.  She also works part-time cleaning the brothel.  She's hoping to go away, leaving the Big Easy.  Her heart is set on college--not in New Orleans, where everyone knows who she is--and who her mother is--but at Smith College, where she hopes to make a fresh start.

Josie's carefully made plans and all her savings might come to nothing when she becomes mixed up in the police investigation of a a murder of a handsome tourist--one who happened to come into the bookstore shortly before his death and who afterwards had drinks with her mother.  As Josie becomes entangled in a web of lies, will she be able to escape her fate in New Orleans?  Will she become just like her own mother in the end?

I found this new work by Sepetys to be engaging from the get-go; Josie is a strong, smart, character with lots of "moxie."  Many of the more minor characters, especially her friend who is a closeted homosexual, are also appealing.  Sepetys portrays the 1950's as a world of secrets, where everyone is part of the New Orleans Mardi Gras, wearing a mask that disguises who they really are.  One aspect of the novel which did bother me is that the world of the prostitutes at the whorehouse seemed to be somewhat prettified; although Josie's mother is an extremely unlikeable character, the other girls at the house who play more minor roles seem to be more stereotyped.  The gangsters, also, seem like stock characters.  However, I enjoyed the fact that the story is not predictable, a fault I often find with teen novels.

This novel, despite its setting in the underworld of New Orleans, does not have gratuitous sex or violence, and could be read by middle school students as well as high school.  While Out of the Easy did not engage me emotionally in the same way that Sepetys' earlier novel, Between Shades of Gray, did, it is a skillfully crafted novel that is well worth reading for its compelling main character and its well realized setting.
Posted by Fourth Musketeer at 5:00 AM

Thanks for this smart balanced review! I agree this is a good read, though not as emotionally compelling as Ruta's first novel.