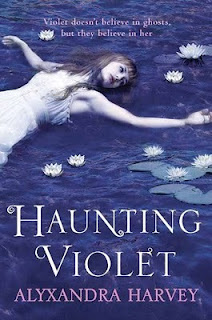 I'm delighted to participate in the blog tour for Alyxandra Harvey’s new novel, Haunting Violet, set in Victorian England. It's a deliciously frightening paranormal historical fantasy just right for summer reading.  Alyxandra is also the author of The Drake Chronicles, a popular vampire series whose fourth volume is due out in November.
In Haunting Violet, our young heroine, Violet Willoughby, has been forced for years to help out in the “family business”--her stunningly beautiful mother puts on fake seances for bereaved parents, husbands and wives to contact loved ones in the beyond.  Their fortunes are picking up, and they’ve been invited to Rosefield, the luxurious country estate of Lord Jasper, a wealthy and influential earl with a strong interest in spiritualism.  Violet is looking forward to visiting with her friend Elizabeth, Lord Jasper’s goddaughter, while Violet’s mother hopes to finalize a possible match between her daughter and Xavier, a kind, handsome, and wealthy young man who’s also attending the country gathering.  But Violet is much more attracted to the unsuitable Colin, an Irish lad who is her mother’s assistant, and whose kisses make her feel “devoured, delicious, decadent..”

Violet doesn’t believe in ghosts--how could she after her exposure to all the tricks of her mother’s medium trade?  So no one is more astonished than Violet when, at the first of her mother’s seances at Lord Jasper’s estate, she sees a girl in the shadows, dripping water.  Here’s Harvey’s creepy description of Violet’s first ghost sighting:

“She met my eyes and it was as if winter blew through the parlor.  When she opened her mouth, the sound was muffled and high-pitched, like nothing I had ever heard before.  She walked toward me, suddenly close enough that the hem of my skirt drew damp and cold.  I cringed back in my chair, looking around wildly...sweat pooled under my arm.”

What is the ghost doing there?  It turns out she’s Rowena, who drowned the previous year--or was she murdered?  She’s desperately trying to warn her twin sister Tabitha of the danger of meeting the same fate, even using a “spirit board” to spell out messages to avert impending doom.  And there’s more ghosts who appear to Violet as well; at Lord Jasper’s ball they’re all over the ballroom, but only Violet can see them, and feel them rushing at her with their spirit hands.  Harvey’s descriptions of ghostly activity are sure to send a chill down the spine of her teen readers.  Will Violet be able to help Tabitha escape her fate, and solve the mystery of her sister’s drowning?  And what will her own future hold?


Harvey imbues this romantic tale with a mystery, romance, and above all, a wry sense of humor; Violet is particularly aware of the irony of her ridiculous situation:  “The real problem was that I didn’t actually believe in ghosts.  But they clearly believed in me.”  They should have the decency to stay dead, she quips at one point.  The reader has the distinct impression that Harvey, and her heroine, are winking at us through the pages!
Readers who enjoy this novel might also want to read Laura Amy Schlitz’s A Drowned Maiden’s Hair, another gothic tale which also revolves around a young girl caught up in the schemes of fake mediums, this time in early 20th century New England.
Posted by Fourth Musketeer at 5:00 AM

Glad you loved this, I did too! And I'm also thrilled to see you recommending A Drowned Maiden's Hair for fans of the book because I have a copy of that I need to read :)

I will have to check out a copy of that book