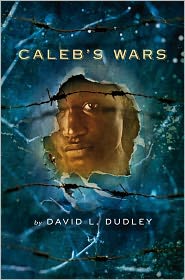 
Caleb's Wars, released last month by Clarion Books, is an intriguing teen historical novel set in the Jim Crow South during World War II.  As the novel begins, two new businesses are opening in 15-year-old Caleb's rural Georgia town:  a new restaurant for whites only, the Dixie Belle, and a POW camp for captured Germans, brought to Georgia to do farm work and replace Americans in the service overseas.  Author David Dudley paints a harsh but undoubtedly true-to-life picture of life for African-Americans at the time.  Caleb has to act carefully around the white people in the town, making sure not to offend anyone or even look a white man directly in the eye.  His family life's no piece of cake either.  His father whips him for disobeying and getting into a fight with some white boys from the town.  "Don't you know by now that white folks'd just as soon kill you as look at you?" he tells Caleb.  His brother's in the military, in the segregated army, and about to be sent overseas, and his mother takes solace in her faith.  Against his father's wishes, Caleb takes a job working at the new whites-only restaurant, where he works washing dishes along with the African-American kitchen workers and a German POW, Andreas, who's been assigned to the restaurant. Caleb can't help but be drawn to the friendly young German, who's supposed to be the enemy.  But when German POW's are allowed to eat at the Dixie Belle, where he and his friends can't be served, it's more than Caleb can take.  How will he come to terms with the many contradictions in his life?

This novel mixes historical fiction with Christian themes as well, sometimes in a way that seems a bit uneasy.  Toward the beginning of the story, Caleb, largely to please his very religious mother, agrees to be baptized.  During the ceremony, and again after, he hears a voice saying "Behold my servant."  Is it the voice of God?  Caleb is as shocked as anyone, and thinks the whole thing is a practical joke by one of his friends.  But when Caleb is able to mysteriously heal the crippled hands of an elderly man, what exactly does it mean?  Is Caleb now a prophet of sorts?  This religious aspect of the story is never fully developed, and seems to fit awkwardly with the historical fiction themes.

Despite its flaws, I found the book stimulating reading that could provoke interesting discussions for a book group or book talk.   One caveat:  Dudley does not shirk from using the "n" word in his dialogue, which of course was widely used at the time this book is set and is historically appropriate.

Disclosure:  review copy provided by publisher.
Posted by Fourth Musketeer at 5:00 AM