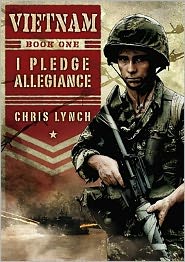 
The first in a new series on the Vietnam War for young readers, I Pledge Allegiance introduces us to four ordinary guys who are best friends:  Rudi, Ivan, Beck, and Morris, our narrator.   Morris is haunted by nightmares about Vietnam, visions of "torn flesh and burned flesh and the end of everything we know, all dying there in the scorching jungle of Vietnam."  The friends have a sacred pledge--if one of them gets drafted, they would all be drafted, even if they weren't serving together.  And when Rudi is drafted, each of them enlists in a different branch of the service.  Morris picks the Navy, where he thinks he can somehow watch over his friends and keep them safe.  But can he stop his nightmares of death and destruction from coming true?

This short, action-packed novel (under 200 pages) is perfect for reluctant readers, even those in high school.  Told in the first person, we can easily identify with Morris and his fears and insecurities.  Lynch does a great job evoking the close bonds between the four friends, as well as the atmosphere of serving on a Navy missile cruiser:  the day to day routines, and the terror of actually seeing action in Vietnam.  Boys will be particularly attracted to this new series.  I was not able to find any information on the rest of the series, but I'm betting that there will be three more volumes, each concentrating on a different one of the four friends, thus profiling a different branch of the service.  This new series is an excellent addition for school or public libraries.

Email ThisBlogThis!Share to TwitterShare to FacebookShare to Pinterest
Labels: 1950-1980

My younger brother pointed this book out to me at our library's Scholastic book fair today. Christmas idea? I think yes! It does look really intriguing...I might end up borrowing it or even picking up my own copy!

This looks like a great action series to give to boys. Thanks for sharing!!

Gay and fake the book is about a whale

hate this book and this is a false review...

this was one of the best book i ever read

good book
but you have some flaus