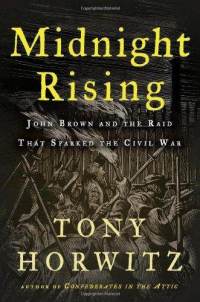 Recommended for 14 and up.

In a vague way, most of us have heard of John Brown and his famous raid on Harper's Ferry that preceded the Civil War.  Best-selling nonfiction author Tony Horwitz points out that the event merits a mere six paragraphs in his son's 9th grade history textbook.   In this compelling new work, Horwitz examines not only John Brown's own history and background but the forces in society that led to his carefully plotted conspiracy.

A descendant of the Puritans, Brown was a committed abolitionist who was not afraid to use violence to help overthrow slavery in the United States.  He and his many sons participated in the pre-Civil War fighting between abolitionists and pro-slavery forces in Kansas, before spearheading the formation of a private army.  His ultimate aim--no less than seizing the federal armory at Harpers Ferry, and freeing all the slaves.   How this conspiracy developed and its high profile aftermath is the subject of Horwitz' riveting new work.

Through contemporary eyes, Horwitz notes, we are tempted to see John Brown as an al-Queda type of terrorist, a "long-bearded fundamentalist, consumed by hatred of the U.S. government...in a suicidal strike on a symbol of American power."  In this book, Horwitz paints a much more complex picture of a charismatic leader of a large family, a man who mixed with prominent industrialists who supported him financially as well as intellectuals such as Frederick Douglass and Henry David Thoreau. He examines John Brown's early life and the events which led to his taking up arms against his own country.

Although the insurrection was quickly put down by future Civil War leader Robert E. Lee, the case mesmerized the nation, polarizing North and South, abolitionists and those who supported slavery.  He became a hero to many in the North and a traitor to those in the South.  Horwitz remarks "Harpers Ferry wasn't simply a prelude to secession and civil war.  In many respects, it was a dress rehearsal. "

I have been a fan of Horwitz since reading his earlier book Confederates in the Attic, in which he tries to understand Americans' ongoing obsession with all things Civil War.  Unlike many of his earlier works, which merge personal narrative with historical passages, this book about John Brown is more of a traditional narrative non-fiction history work.  Horwitz' elegant prose reads like a novel, and this book offers an in-depth and fascinating portrait of one of history's pivotal characters, and an important epoch in American history.  While this is an adult title, I would highly recommend it to high school students with a strong interest in history as well.
Posted by Fourth Musketeer at 5:00 AM

This seems particularly good reading in light of the "occupatriot" movement that has sites in so many cites.

What a good point! I hadn't even thought of that comparison.