In this charming novel for children, Dutch author Bibi Dumon Tak fictionalizes the true story of an orphaned Syrian brown bear cub who's adopted by a group of Polish soldiers during World War II, eventually becoming the unit's beloved mascot.  The mischievous bear cub was named Voytek (smiling warrior) by the soldiers.  As the soldiers journeyed through Iran and Iraq on their way to their assignment in Palestine to join their Brtish allies, even the officers softened at the adorable teddy bear of a cub.  But of course, cute little cubs soon grow big, and Voytek soon is getting into plenty of trouble, especially with the resident monkey, Kaska, who loved to throw stones, sand, or whatever she could find at poor Voytek's head.  But that wasn't the whole menagerie that followed the soldiers around; there was also a dog named Stalin, who Kaska liked to hitch rides on, and a dalmatian who loved to romp around with the bear.

Tak writes about the soldiers and their animal friends with such good humor that I found myself laughing out loud at their antics, especially touching in the middle of a war.  When the soldiers are sent to supply Allied troops in Italy, Voytek takes his place helping to move live artillery shells, when he's not stealing food from the cook or sliding up and down cranes like an acrobat, stopping traffic as soldiers stopped to cheer him on.

While a story of a tamed bear who's goodnaturedly given chocolate, beer, and cigarettes isn't quite "politically correct" for today's American audience, I was charmed by the story of Voytek, his animal friends, and the soldiers who loved them in the middle of wartime.  The book is greatly enriched by the pencil drawings of Dutch illustrator Philip Hopman, which perfectly capture the humor and pathos of the story.  Any animal lover will be delighted by the story of lonely soldiers, little more than boys themselves, cuddling up at night with a furry bear, who liked to suck on their fingers at night as a sort of human pacifier.

The conclusion of the book includes some photographs of Voytek with his soldier buddies, as well as an afterword about Voytek's true story.

For more on Voytek and his soldier friends, see this website set up by the son of one of the soldiers from Voytek's unit.  The website offers plenty of photos of the real bear as well, including this one: 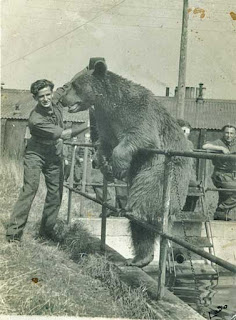 I don't usually read war books but this one looks like one I can manage!