Thanks so much to author Monika Schroeder for supplying a thoughtful guest post for Armistice Day, better known in the United States as Veteran's Day.  Monika's new book, My Brother's Shadow, deals with the critical period in German history at the end of World War I.   I am also delighted to be able to offer a giveaway of this new young adult novel.  If you'd like a chance to win, please leave your name and e-mail address in the comments below! 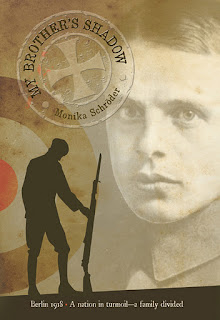 After the War was Lost –
Germany, my home country, has started two World Wars in the last century. Both wars not only brought death and terror to large parts of Europe, but also ended in defeat followed by fundamental changes of the political system. I have tried to imagine how regular people dealt with these changes. I find it fascinating that a German person born at the beginning of the 20th century could have experienced a monarchy, a failed democracy, a fascist dictatorship,
a socialist totalitarian regime and then again a democracy, just within one life span.
In my first novel, THE DOG IN THE WOOD, I wrote about the end of World War II and how people in a small village in eastern Germany experienced the arrival of the red Army. This story was based on what my father had told me about the end of WWII and how his family was affected by it. My new novel, MY BROTHER’S SHADOW, is set in 1918, another important transition time in German history. I tried to imagine what it might have been like for a young man who had grown up under the Kaiser to see the monarchy disappear and to be confronted with socialist ideas and women’s emancipation.
Nothing is the way it used to be for Moritz, the 16-year old protagonist of MY BROTHER’S SHADOW. His mother and sister attend illegal socialist meetings and talk about how the Kaiser needs to abdicate and the war needs to end. His older brother, Hans, returns from the war, maimed and bitter, blaming Germany’s defeat on Jews and socialists. Then Moritz meets Rebecca, a Jewish girl, who is also a socialist, and he can’t stop thinking about her. When a revolution sweeps away the monarchy he has to make a choice between his dangerously radicalized brother and his love for the women around him who are working to usher in the new democracy.
The stipulations of the Versailles Treaty left Germany humiliated in the eyes of many of the returning veterans. These young soldiers, like Hans in my book, had no work and couldn’t find their place in the new Germany. Looking for scapegoats, they blamed socialists and Jews for Germany’s defeat. Politically the country was divided between the extreme right, represented by militarists who didn’t shy away from violence, and the left. Soon after my novel ends, in 1919, communist politicians Rosa Luxemburg and Karl Liebknecht were assassinated. A civil war ensued and the weak economy helped the rise of the National Socialists who promised a new “strong Germany.” In addition, the structure of the Weimar Parliament gave room for too many small political parties, making it hard to form coalitions and maintain a stable government.
Armistice Day, November 11, 1918, marked the end of a long war and today many countries commemorate the victims of World War I. For Germany it was also the beginning of a new democratic era. But when Friedrich Ebert, the first democratically elected president, signed the peace agreement in February 1919 in Compiegne, France, the seeds for the destruction of the young German democracy had already sprouted.
Don't forget to leave a comment with your e-mail for a chance to win Monika's newest book!
Posted by Fourth Musketeer at 5:00 AM

Probably fueled by reading Anne Frank's diary, I loved WWII books of all kinds when I was young. This sounds like something I would have loved.

This is something I would have loved when I was younger, and it does sound very intriguing.

This book is on my TBR soon list. I'm especially eager to read a story set in Germany during this era. Would love to win.

I've studied much from the American, Japanese and French perspective of this era and would appreciate developing a better understanding of Germany.