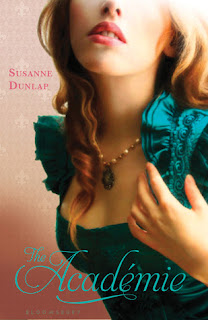 
Susanne Dunlap is a favorite author of mine for YA historical fiction with a romantic flair, books that will realistically appeal much more to girls than to boys.  This is her fourth YA title (she has also written historical fiction aimed more at adults) and the first set in France.

In this new novel, Eliza, the young daughter of future U.S. President James Monroe, is in France with her mother, where she is left behind in a chic boarding school just outside the city that's run by a former courtier to Marie Antoinette, Madame Campan.  The school is attended by France's finest young ladies, including Caroline Bonaparte, the youngest sister of the up-and-coming French general, as well as Hortense Beauharnais, the daughter of Napoleon's wife, Josephine.  The book is set in the turbulent year 1799, the year in which Napoleon overthrew the French Directory and took power for himself as First Counsel, leading of course to his eventually crowning himself Emperor (although not in the course of this novel).

The book alternates between four different narrators:  Eliza, Hortense, Caroline, and Madeleine, the mixed-race--and of course entirely unsuitable--daughter of a cruel, drug-addicted Paris actress. Eliza quickly picks up on the bad blood between Hortense and Caroline at school, wondering what role she will play in the school's hierarchy of students.  All the girls seem much more concerned with their love lives than any studying, not too surprising since their primary curriculum seems to be learning how to talk prettily to young gentlemen, including the lads from the nearby boys' school who sometimes visit for training exercises.  But the school's far from boring.  There seems to be plenty of intrigue, with Caroline whisking innocent young Eliza off to a clandestine party in Paris when they're supposed to be asleep in bed.  All the girls develop crushes on the wrong sort of man--Hortense on a music teacher, Caroline on a general that her brother doesn't want her involved with, and both Eliza and Madeleine, the actress' daughter, on Hortense's handsome brother, Eugene.  Will anyone wind up with the man of their dreams?  You'll have to read on to the shocking ending to find out.

And in the middle of all of this romantic drama, there's a political drama behind the scenes, a possible coup, one that the girls are determined to witness, even dressing up as soldiers to sneak off and see what's going on.  Not to mention Eliza's trying to come to terms with her racial attitudes from growing up with slaves on a Southern plantation.

Although I greatly enjoyed The Academie, I can't say it's my favorite of Dunlap's novels.  I found it occasionally confusing switching back and forth between the different narratives, and I found it hard to suspend my disbelief at some of the girls' dangerous antics, which seemed a bit far fetched for young girls in this setting.

An author's note explains that while all three of her main characters (Eliza, Hortense, and Caroline) indeed attended the same boarding school, they were probably not all three there at the same time and the author admits to taking some liberties with the actual timeline in structuring her story.  Nonetheless, the real Eliza and Hortense remained friends and Eliza even intended Napoleon's coronation as emperor in 1804.  And the rivalry between Napoleon's family and Josephine and her children is a well-established historical fact.

This novel is set at a time period we don't see portrayed much in historical fiction--after the French Revolution, but before Napoleon fully takes power.  For that reason alone, I would recommend this book.  I think young people, particularly girls, will enjoy the romance and political intrigue that Dunlap skillfully portrays in this school setting so different from today.

Tweens and teens wanting to learn more about the real Napoleon might enjoy the lavishly illustrated
Napoleon:  The Story of the Little Corporal, by Robert Burleigh (Abrams, 2007) 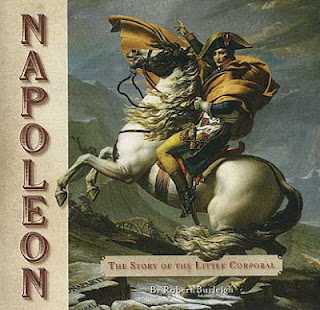 Teens might also enjoy Betsy and the Emperor, by Staton Rabin (Margaret K. McElderry, 2004), which tells the story of a young girl who gets to know the famous man while he is a prisoner on St. Helena. 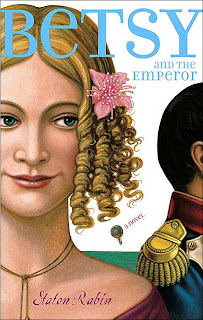 HARD TO BELIEVE, BUT TRUE:  I was stunned to read in the LA Times (see link below) recently that there are plans afoot in France to make a Disneyland-like theme park based on Napoleon, complete with snowy battle re-enactments and a ride on Napoleon's hat. What will be next?  An amusement park with a pretend guillotine where you get your head cut off and then reattached???

As soon as I read that Eliza was the youngest daughter of James Monroe, this immediately went on my must read list. I absolutely loved The President's Daughter by Kimberly Brubaker Bradley.

I'm all for historical fiction with action and romance. I don't even mind a far fetched story line or two. I love the Outlander series by Diana Gabaldon for which I willingly suspended my disbelief. My biggest problem with this book (that I haven't read, mind you) is the provocative cover. It doesn't look like a cover for a story taking place in the late 1700's, and it certainly looks too racy for kids 12 and up. The cover is basically cleavage.