Blog Tour stop: Jimi Sounds Like a Rainbow: A Story of the Young Jimi Hendrix, by Gary Golio and illustrated by Javaka Steptoe (Clarion Books, 2010) 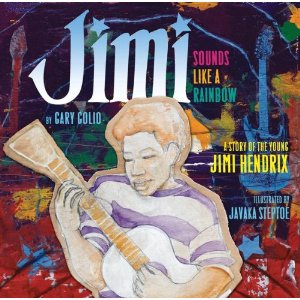 I am delighted to participate in the blog tour for an exciting new picture book biography of rock legend Jimi Hendrix, Jimi:  Sounds like a Rainbow, by Gary Golio, illustrated by award-winning illustrator Javaka Steptoe.

At first glance, Jimi Hendrix, who tragically died at age 27 from a combination of prescription drugs and alcohol, may seem like an unlikely subject for a picture book.  But Golio, an artist and musician himself as well as an author, manages to bring to life Jimi as a young boy and his unique way of looking at the world.  What we might think of as ordinary sounds took on extraordinary colors to this musically gifted young boy.  "A child was laughing, squealing like a clarinet on one of Dad's big band records," writes Golio.  Music of all kinds set off "fireworks in his mind," and he begs for a guitar of his own.  With his guitar, he could make a "rainbow of sounds," and with these visual analogies, Golio explains how Hendrix taught his guitar to make unconventional sounds, using it "as an artist uses paint."

Golio's text is set off by extraordinary collage illustrations by Javaka Steptoe which evoke the psychedelic colors and shapes of the 1960's.  The illustrations with their wild colors (i.e. Hendrix painted completely in shades of purple and blue) and varied textures suggest the rainbow of sounds produced by Hendrix' guitar.

Jimi has already received starred reviews in Kirkus and School Library Journal and would be a great purchase for libraries as well as parents who would like to share one of rock's legends with their children.

As part of the book's blog tour, Gary kindly offered to answer some questions for The Fourth Musketeer.

Q: How and why were you drawn to Jimi Hendrix' story, especially that of his youth, and why did you decide to present it as a picture book?

About eight years ago—while deepening my own playing of blues guitar—I kept coming across Jimi’s name. Reading about him in the classic biography, Electric Gypsy, I was struck by the tenderness and beauty of his childhood, elements that transcended the early poverty and family troubles. When I looked at all that through the lens of children’s books (my wife, Susanna Reich, is a longtime author), I envisioned a story that was both visual and appropriate for kids. Jimi’s tale is about the power of art, imagination, hard work and determination. I wanted to present Jimi to a new generation, freshly, beyond myth and misinformation. Some people will be surprised.

Q: You have two other picture books on famous musicians set for publication in the next year, When Bob Met Woody, about Bob Dylan, and Spirit Seeker, on John Coltrane. What is in the planning stages for you at this point? Are you going to continue with a series of picture books on 20th century musicians?

Even in children’s book publishing, the scheduling and order of books is unpredictable. The first two books I wrote were about Jimi and Bob, followed by other picture book stories about Pablo Picasso, Henri Rousseau, and John Coltrane. My agent is still shopping my book on Picasso (about the themes of war and peace, and doves, that run through his life), and right now I’m illustrating my own picture book text about Charlie Chaplin, an incredible artist and a fascinating subject. But I’ve still got some musical people in mind—surprising choices—that I’ll be working on as future picture book projects. I really love to pair writing with pictures!

Q: As an artist yourself, were you able to have any input into the choice of illustrators for Jimi and your two upcoming books, all three of which feature different illustrators? If not, was it difficult to give up control of that part of the project? The illustrations in Jimi are so striking, and so integral to the text--were you able to work with Javaka Steptoe at all on the feel of the artwork for the book, which seems to call to mind the psychedelic art styles of the 1960's, or was that all done independently?

Like most picture book authors, I had no input into the choice of illustrator for JIMI, although I was asked—as an artist—what I thought about my editors’ picks for the Dylan and Coltrane books. But while part of me would like to control everything, I learned early on that despite my longstanding experience as an artist, I wasn’t very good at imagining who would be a good fit for my texts. Fortunately, the two editors I’ve worked with—Lynne Polvino at Clarion, and Alvina Ling at Little, Brown—have very good instincts about these things, and made excellent choices. As for Javaka, he’s his own man, and his bold images are a beautiful balance of spontaneity and thoughtfulness. I love what he’s done, and I think Jimi would, too.

Q: Can you tell us a little about your process for researching this book? Were you able to interview members of Jimi's family, or friends from his youth, or did you rely largely on written sources?

My favorite book about Jimi was written by Mary Willix, who went to school with him in Seattle. She wrote up her interviews with those who knew him in a book called Voices from Home, and the stories shine a fine light on the details of Jimi’s childhood. As always, you have to sift and weigh what you’re given, but Mary’s book helped to fill out a more nuanced picture of Jimi the Boy. In addition, I read numerous biographies, listened to countless recordings, watched a ton of videos (thanks to YouTube and DVDs!), and played a lot of Jimi’s music on the electric guitar. I’m even doing a musical story of the young Jimi Hendrix—a half-hour-long performance, using the Stratocaster—at a few venues in my area, to complement my booksignings. It’s something I’ve developed for school visits. There’s nothing like the sound of a live electric guitar!

Q: It would have been great if a CD with some tracks by Jimi Hendrix could have been included with this book. But since there isn't any music that comes along with it, can you recommend some of your personal favorites that you feel would illustrate the story musically for those readers who are not well acquainted with Jimi's music?

A CD would have been nice, but way too costly. As for songs that musically play on young Jimi’s story, I’d offer the following: One Rainy Wish, May This Be Love, Little Wing, Castles Made of Sand, and Angel. Then there are those that highlight some of his greatest musical virtues (tonal color, range of expression, blues roots, rhythmic brilliance, and lyrical beauty): 1983 (A Merman I Should Turn to Be), Bold As Love, Red House, Are You Experienced, Hear My Train A’Comin’, Voodoo Child, and (of course) The Star-Spangled Banner.

Looking for other great non-fiction books for kids?  Check out Nonfiction Monday, hosted this week by Write About Now, for more terrific non-fiction selections.

http://www.youtube.com/watch?v=rkDzSfCUUAY&feature=plcp
Please watch my video of my music tribute to Jimi Hendrix. Also check out my YouTube page of what I do with your pictures and videos. Thanks.