Book Review: On the Blue Comet, by Rosemary Wells (Candlewick, 2010) 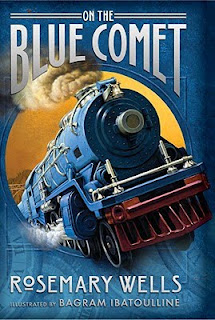 Recommended for ages 8 through 12.


Fans of time travel books and trains should love acclaimed picture-book author and novelist Rosemary Wells' newest release.  In this exciting story, eleven-year-old Oscar has a good life in Cairo, Illinois, even though his mom died when he was little.  He and his dad manage just fine, thank you; Oscar cooks supper after school, does his homework, and after his dad comes home from work, they work on their elaborate Lionel model train world in their basement.

But when the stock market crashes, the Depression follows, and soon Oscar's dad loses his job selling tractors. They lose their house, too--including the model train collection--and his father has to go to California to look for work, leaving Oscar with his no-nonsense aunt Carmen.  Oliver's loneliness for a father figure leads him to a friendship with a mysterious vagrant, Mr. Applegate; Oscar feeds Mr. Applegate pancakes, and Mr. Applegate not only helps him with his math homework, but also talks to him about Professor Einstein and the possibility of time travel, and even teaches him poetry.

Oscar soon discovers that his beloved Lionel trains are on exhibit at the local bank--the same one that re-possessed their home.  While visiting the trains at the bank, he witnesses a horrible bank robbery--one that propels him literally forward in time, through the Lionel trains. Will he ever get back again to be reunited with his father?

Rosemary Wells has written a highly imaginative and well-executed novel that will appeal to children who like time travel and fantasy stories; Wells incorporate plenty of history into the story as well, as Oscar travels in time from the middle of the Depression to the beginning of World War II and back even to 1926.  The book is sure to appeal to train lovers as well; while Lionel trains may not be as widely known as they were at one time, this book would be a logical step up for children who loved Thomas The Tank Engine in their pre-school days, as the different trains play a substantial role in the story and are lovingly described by Wells.

In his time travels, Oscar meets many famous people, including a very young Ronald Reagan, identified only as "Dutch,"  Alfred Hitchcock, Joe Kennedy, and J.P. Morgan, among others.  The children reading the novel may not be able to pick up on these references, however; the book would have been enriched by an Author's Note providing a bit of biographical information on the real-life historical people who interact with Oscar throughout the story.

The novel is illustrated with stunning acrylic gouache paintings by acclaimed illustrator Bagram Ibatoulline, whose many works include The Miraculous Journey of Edward Tulane.  The nostalgic, realistic style of the illustrations evokes period artwork by Norman Rockwell, and fits in well with the Depression-era setting of the book.

You can download a discussion guide for this novel from Candlewick's website, as well as read a sample chapter.
Posted by Fourth Musketeer at 5:00 AM

My brother would have loved this book - time travel AND Lionel trains. He got his first train set at 4 and continued collecting until he died in 2001. They went to his daughter, who has been my foster child since then, though not a child anymore. I think I will send her this book to read in China. Thanks for the great review.

Thanks! for sharing this great review about this book.

I'll be looking for this one...I hope it gets nominated for the Cybils, so that I can read it with a clean conscience!

Hmmmm and what about grown men who love trains? Will they like this book too? Very intriguing for me, a history writer married to a train buff.