Giveaway and Book Review: Prisoners in the Palace: How Princess Victoria Became Queen with the Help of her Maid, a Reporter, and a Scoundrel, by Michaela MacColl (Chronicle Books, 2010) 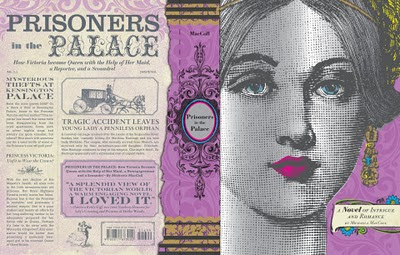 
Do you dream of being swept away to Victorian England?  Then you won't want to miss debut novelist Michaela MacColl's story of the young Princess Victoria and her lady's maid, Liza.  Liza, 17 years old and dreaming of making a stellar marriage,  has been raised as a member of the privileged upper class, but has lost everything when the novel opens.  Her parents were killed in a tragic accident, and not only has she lost her only family, she's discovered that she's penniless as well, and is about to be turned out on the street by Claridge's, the swankiest hotel in town.  Fortunately, Liza secures an interview for what she thinks is a lady-in-waiting position to Princess Victoria, heir to the throne.  But no--it's a lady's maid position, but beggars can't be choosers, and Liza is soon part of a life she never gave a second thought to--the servants' world "below stairs."

Liza is shocked by Kensington Palace, where Princess Victoria lives with her mother, the Duchess of Kent, her beloved governess, and a few servants in less than luxurious conditions--the palace itself is run-down, with peeling paint, threadbare carpets, and chilly rooms.  Nonetheless, Liza can't help but be enchanted by the princess herself, whom we first meet with her little dog, Dash, yipping at her heels.

Liza's ability to speak and understand German, the native language of Victoria's mother, makes her useful as a spy, and she soon finds herself embroiled in the intrigue of the palace, as the Duchess and her companion Sir John scheme to spread rumors in London's press that the princess is a "featherbrained girl," all with the aim of furthering their own political ambitions.

But this is indeed a novel of romance as well as intrigue, as described on the striking cover (complete with mock Victorian broadsheet on the back!).  While she may no longer be having the London season she and her mother once planned, Liza's dreams of romance are not lost when she meets the handsome Will Fulton, self-made publisher in Fleet Street.  Can Liza, Will, and the mysterious Inside Boy, a petty thief who lives hidden in the palace walls, help save the princess from those who plot against her?

Interspersed with the third person narrative are (fictional) excerpts from Liza's diary, along with actual excerpts from the diary of then-Princess Victoria.  We are regaled with details of Victoria's daily life, from her geography lessons to her singing lessons and dress fittings, as well as the darker side of Victorian London, with prostitutes and ruined servant girls.

Prisoners in the Palace is a highly entertaining romp through Victorian London, likely to please teens and even older tweens who enjoy historical novels.  Author MacColl, who has a background in history herself, includes a detailed Author's Note with further information about Victoria, her family, and an annotated bibliography with suggestions for further reading on this fascinating period.

And teens interested in Victoria will certainly enjoy the Emily Blunt film from 2009, The Young Victoria, for another point of view about the early years of her long life.

GIVEAWAY:  Chronicle Books has generously donated a signed ARC of this book for the readers of The Fourth Musketeer!  If you would like to enter, please leave a comment below with your e-mail address.  The winner will be selected on October 17 through a random number generator.  U.S. or Canada entries only, please.

An interview with author Michaela MacColl will be posted on Friday, October 15!

Here's a link to the first chapter of this novel.
Posted by Fourth Musketeer at 5:00 AM

This sounds lovely! I loved The Young Victoria!

I first heard about this part of English history from the movie, The Young Victoria. The events contain all the elements for a bildungsroman story for children. I always love to read historical fiction, and then read other books to try to get a more rounded and accurate picture of that time.

Sounds great! Young Victoria was a lot of fun too :)

This sounds fun! Please enter me in the drawing. Years ago I picked up a facsimile edition of Queen Victoria's Sketchbook. She was a very talented artist. There was an interesting article recently on how she and Prince Albert collected art. I may be able to track it down if you are interested. Another current author that gives a glimpse of that period is Marissa Doyle in Bewitching Season, where the heroines meet the young soon to be Queen Victoria and help her escape her mother and Sir John Conroy, a nasty and real historical figure. It will be interesting to see how this book portrays this situation.

Enter me please in the contest. I think this book looks awesome!

Ahhh, I think this has to be one od the best historical fictions I've ever read! I loved the two covers and really enjoyed the story...it wasn't boring like I find most historical novels.