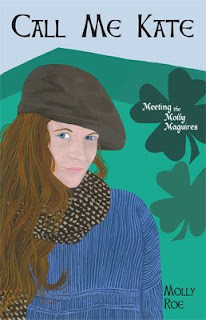 Fourteen year-old Katie McCafferty does not have an easy life--when her father is injured in a mining accident, she has to give up her dreams of completing school in order to go into service to help her family put food on the table.  The battlefields of the Civil War might be far away for the hardworking Irish immigrants in Katie's Northeastern Pennsylvania community, but when Lincoln enacts a draft in 1862 for anyone who can't come up with $300--an impossibly high figure for all but the rich--to hire a replacement, tensions run high.  After all, as Katie's mother points out, "Asking American citizens to fight against the Rebs is reasonable, but it isn't fair to expect men who aren't even citizens to fight."  Men begin to talk about striking, and organize a secret labor movement, the Molly Maguires, to fight the coal barons.

Molly is fortunate to secure a position with a rich family in their thirty-room mansion, which provides her a unique opportunity to spy on the rich coal mine owners who congregate there for social occasions.  When she comes across information that endangers her childhood friend, Con, and his family, she knows she must act to save her friends and her community from the revenge of the mine owners, even if it means infiltrating the Molly Maguires herself and volunteering for a dangerous mission.

The author's careful research shines through in the novel, and she peppers the narrative with many interesting details of the life of a servant in a mansion of the period.  For example, Katie takes an immediate dislike to the owner's little lapdogs, who are fed tidbits of the best meat while people in her own community have no meat at all to put on the table.  And how must it have felt to have a mistress who could not be bothered to learn your name, but instead called all the Irish servants "Bridget?"

Told in the first person, this novel will appeal to readers who enjoyed series such as American Girl and the American Diaries book series, and are looking for a novel aimed at a slightly older audience.  The heroine, Katie, with her courage and can-do attitude, will appeal to contemporary girls.  Those of Irish heritage as well as those in Pennsylvania are likely to find the book especially interesting, with its insight into the Irish immigrant experience and the harsh realities of life in the coal-mining communities, but the book also has broader appeal to those looking for a fast-paced historical fiction tale set in one of the most turbulent and fascinating periods in our nation's history.
Posted by Fourth Musketeer at 8:44 AM

Margo - first off let me say thank you for devoting a blog to historical fiction - my favorite genre.

We appreciate your support of 'Call Me Kate' and for sharing the book with your blog readers.

I'm glad that the level of detail that Molly Roe incorporated enriched the story for you. And it's good to note that you feel that the character of Katie would appeal to girls who devour young adult fiction.

This sounds like a great read! Loved your review--I've seen the book around but was hoping to see some reviews of it. :)