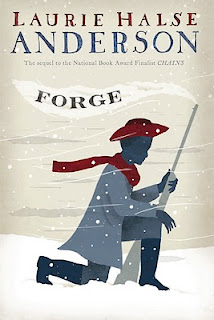 
I was so excited to finally get my hands on Forge, the sequel to Laurie Halse Anderson's acclaimed Chains, which was a National Book Award finalist and the winner of the Scott O'Dell Award for Historical Fiction.  About the only thing I didn't relish about Chains was the ending, which left the reader with a nail-biting cliffhanger in what felt like the middle of the story.

If by some chance you missed Chains, you'll want to read it before delving into this sequel--the second volume of a planned trilogy.  Chains, set at the beginning of the Revolutionary War, focuses on the story of Isabel, a 13-year old slave owned by a prominent New York City family who support the British.  Isabel meets another slave, Curzon, with ties to the Patriots, and becomes a spy for the Patriot cause--with the hopes of obtaining her freedom.

In Forge, the story begins where Chains ends, with Isabel and Curzon escaping to freedom, but the focus of the story quickly changes from Isabel to Curzon.  The two have separated again, with Isabel running away to try to find her sister and Curzon finding himself in the middle of the Battle of Saratoga, then enlisting in the Patriot army.  The irony of a slave fighting for the freedom of others does not escape Curzon, who attempts to argue his case with his friend and fellow soldier Eben.  Curzon questions whether bad laws deserve to be broken, but Eben is frustrated by Curzon's logic.  "Two slaves running away from their rightful master," he says," is not the same as America wanting to be free of England.  Not the same at all."

But when the army arrives at the winter encampment at Valley Forge, white and black soldiers alike are unprepared to deal with the conditions there:  about 12,000 soldiers with no barracks, bitter cold, and no meat.  The author begins each chapter with a quote from a contemporary source, many of which are increasingly desperate reports from General Washington to the Continental Congress on the need for supplies of all kinds, from food to shoes to clothing.  Most days rations consisted of nothing but firecake, a mix of flour and water that tasted like ashes and dirt, and was "hard enough to break rat's teeth."  Anderson so successfully evokes conditions at the camp that we groan along with the men at their terrible conditions.  But the men manage to find a little humor in their situation..no food means "we've got nothing to fart with."  A special treat for Christmas is a piece of chewy pigskin to chew on (I'm assuming like the pigs ears people buy now for our dogs).

Through all the hardship Curzon manages to keep secret that he is really an escaped slave, but he can't stop thinking about Isabel and what might have become of her.  Fate is to bring them together again at Valley Forge.  While General Washington and Baron von Steuben try to forge the raggedy American volunteers into real troops, Curzon and Isabel try to forge their way to a new relationship...are they more than friends or an ever-bickering brother-sister pair?  And can they in turn forge their way to a life of freedom along with the Patriot army?

This book equals Chains in its ability to bring the complex world of Revolutionary America to life--a world in which some struggled for freedom while others were condemned to a life of slavery.  What will happen to Curzon and Isabel?  We won't know until the last volume in the trilogy comes out next year.

While the main characters in the story are fictional, Anderson integrates their story seamlessly around real-life figures such as Washington, Nathaniel Greene, Charles Wilson Peale, and others, and in an afterword explains clearly which characters are "real" and which are fictional, as well as additional historical explanations.  For example, she explains how black Americans fought for both the Patriots and the British.  The appendix also provides a wealth of suggestions for future reading.

I think the "thriller" label is justified for Forge, as it is for Chains--I had a hard time putting the book down, and literally gasped with shock at times as I turned the pages.  Put this in the hands of young readers, please, and kudos to Anderson for another page turning thriller (with some non-excruciating history thrown in).

Here's an interview with the author:


From her blog:   “I believe historical fiction can become just as popular as fantasy. Both genres provide intense coming-of-age experiences that are set in different worlds and layered with fascinating detail about how that world works. Both genres feature narrators who are often in life-or-death situations. Both fantasy and historical fiction allow readers to examine the human condition from a safe distance, apart and away from their daily lives.”

Love this series. I started reading them because my middle school students read them, and I love the author. I can't wait for the next book!