The Awards Season Begins: The Scott O'Dell Award is Announced 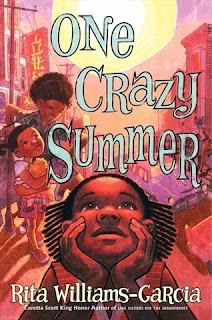 The Scott O'Dell Award for Historical Fiction for this year has just been announced, and I don't think anyone will be shocked that it has gone to One Crazy Summer by Rita Williams-Garcia, which has been getting a lot of Newbery buzz as well.  The Scott O'Dell Award, established in 1982, is given for a distinguished work of historical fiction for young people, published by a U.S. publisher; the setting must be South, Central, or North America, and the author must be a U.S. citizen.

I recently included One Crazy Summer on my 10 favorite books of 2010 post.

The award was announced on Read Roger today; Roger Sutton, editor of the Horn Book, is also the chair of the Scott O'Dell committee.

Congratulations to Rita Williams-Garcia!  I hope she will do something fun with her $5,000 in prize money, like go on that Disneyland trip that Delphine and her sisters were dreaming of!