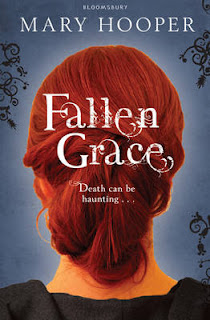 
British young adult novelist Mary Hooper channels Charles Dickens in her newest historical novel for teens, Fallen Grace.  A spellbinding gothic mystery set in Victorian London complete with orphans, tragedy, and evil villains, Fallen Grace tells the story of orphans Grace Parkes and her simple sister Lily, who come from a respectable family but are now barely managing to stay alive on the cruel streets of London by selling bunches of watercress.  As the novel opens, the unwed Grace delivers a stillborn illegitimate baby.

Through her attempt to find somewhere suitable to bury her baby, Grace meets two individuals who will change her life; one, James Solent, is a handsome young lawyer's clerk who is attending his sister's funeral, and the other, the odious Mrs. Emmeline Unwin, is the wife of the owner of the largest firm of undertakers in London, a very profitable enterprise indeed.  Mrs. Unwin thinks the beautiful Grace would make a wonderful mute, a young girl paid to be a silent mourner at a funeral, and wishes to employ her.  Grace shudders at the thought, but when she and her sister find themselves evicted from their lodgings not too long after, she finds herself with nowhere else to turn.

Little does Grace know that barristers have placed an ad in a London newspaper looking for her sister, since it turns out they are the recipients of a valuable inheritance.  But the evil Unwins want to claim the inheritance for themselves, and are willing to lie and cheat and even get rid of poor Lily and Grace if they have to!  Will Grace be able to somehow outwit the evil Unwins, and claim what is rightly hers?

I couldn't put down this novel, as I became engrossed in the story of Grace and Lily, the terrible wrongs done them by the charities of the time, and the difficulties of their lives as they try to survive on the street in London.  Victoria and her beloved husband Albert appear briefly in the story, as does the most popular novelist of the times, Charles Dickens.  Most fascinating of all to me were the details of the London funeral trade and the Victorian cult of mourning, which includes the niceties of mourning dress and behavior, fanned by Queen Victoria's early mourning for her husband.  A special railway even existed to take mourners, separated by class, of course, to a vast cemetery built outside of London.

This is a terrific book to recommend to teens who like orphan tales, Victoriana, suspense and romance combined, and an excellent purchase for school or public libraries.  It makes a great contemporary read-along for a number of Dickens novels typically read in high school, such as Great Expectations.  Even if Dickens himself didn't appear briefly in the story, we can't help but think of Dickens' novels when reading Falling Grace, with its honest, noble, kind, and beautiful heroine in desperate circumstances, the money-hungry villains who take advantage of innocent children, and the requisite happy ending.

The book includes historical notes from the author.


Fallen Grace is one of 60 (wow!) nominees for the Carnegie Award 2011, the British equivalent of the Newbery.  For a complete list of nominees, click here.

The book was released last year in the UK; other reviews can be found on Goodreads as well as many UK blogs, including:

Hooper's next novel, Velvet, will also be set in the Victorian era; according to the author's website, it looks at fraudulent spiritualism, and is also a love story.  I look forward to reading it!

I loved Fallen Grace and I'm so glad you enjoyed it too! I didn't know it was only just being released in the US. Mary Hooper is coming to my school next week (very exciting!) and my librarian has arranged for me to do a small interview with her so I hope I'll be able to find out more about Velvet :)

Wow, what a great cover! I don't read much historical fiction, but this one looks very appealing.

Stephanie, I'll look forward to reading more about your visit with Mary Hooper!