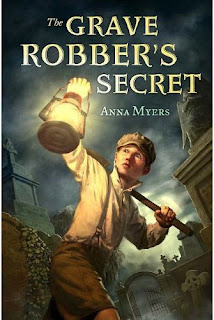 Author Anna Myers' newest historical novel for children is a dark tale indeed, opening with a creepy graveyard scene in which young Robby and his Da steal a corpse from a freshly made grave.  The theft is described in great detail, as poor Robby has to get into the grave with the corpse in order to help his father remove the body.  As long as they leave the clothes and any valuables, no crime was considered to have been committed.  The body, that of a young girl, is then sold to the medical school, where Robby meets Dr. Bell, the head surgeon. Robby is disgusted by this work, but his father insists Robby help him, threatening otherwise to take Robby's mother along.

Robby's mother runs a boarding house in 19th century Philadelphia, with only one lodger, the kind but very elderly Miss Stone.   But it appears their luck might be changing when an important-looking man, William Burke, shows up with his young daughter Martha to rent rooms.  Robby's intuition tells him that something about Burke is sinister, and when he follows him to see what he's up to, he discovers Burke is a professional gambler.  But there's more to Burke than gambling, and soon he gets Robby's Da involved in his schemes.  Now Robby doesn't have to go robbing graves during the night anymore, and indeed he gets a small job working for Dr. Bell at the medical school.  But there's a truly evil project going on right under Robby's nose:  one that results in several murders carried out right in the boarding house!  Can Robby expose Burke's evil-doing without leading his own father straight to the executioner?

An author's note explains how this book was partly inspired by the infamous case of Burke and Hare, who committed a series of gruesome murders in a Scotland boarding house in order to sell the bodies to medical schools.  The publicity about this case led to a law passed in Great Britain making it a crime to take bodies and at the same time providing that unclaimed bodies be given for medical school use.  Grave robbing was prevalent in the United States as well.

Although the publisher recommends this book for ages 8-12,  I would suggest the book for middle schoolers (10-14) because of the very dark nature of the content.  The story itself is well paced and exciting, and could be a good choice for reluctant readers looking for a historical title, particularly those who like "scary stories."  Robby is an appealing character who tries to do what's right, even at the expense of his own family.  The book does play to the stereotype of the long-suffering Irish mother and the drunk, abusive Irish father.  Robby's mother makes excuses for the father's behavior, telling Robby not to hate his father, but rather to feel sorry for him and to pray for him.  She tells her son that she can't leave his father, but Robby can when he's old enough. While this may offend out 21st century sensibilities, many women indeed were trapped in unhappy marriages during this time, with no feasible way out, especially since their husband controlled all the property.

Interesting and creepy at the same time! Perfect for a reluctant reader!