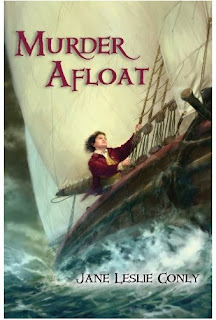 
Benjamin has a happy life in 19th century Baltimore in his affluent family, with his own pony, and no worries other than planning a picnic with his pretty neighbor Jane.  That is, until he is grabbed with a group of German immigrants and forced to work as part of the crew on the Ella Dawn, a decrepit oyster boat.  The Captain, who rarely surfaces, is a cruel drunk, and the first mate, Plum, runs the ship with a heavy hand.  They dub Ben "Little Gentleman" and laugh when he tells them his father is a wealthy lawyer.

Little did Ben know that the delicious oysters he and his family enjoyed at the holidays were likely to have been caught by a half-starved man or boy coerced into working on the oyster barges.  The work was considered so awful that no one would do it for wages, so the men are locked into the hold each night until the oyster season is over.  Although on the barge Ben no longer goes to school, he gets an education in life that he could never have imagined at home in Baltimore.

Conly writes in detail about the hard life the men on the barges faced, with long hours of backbreaking work and constant hunger.  Yet in spite of the hard work and awful conditions, Ben develops a love of the sea, and his family and luxurious lifestyle seem only a distant memory.  Will he be able to escape his bondage and return to his family?  Or does he no longer want the conventional life of a lawyer that his family had planned for him?

Fans of adventure stories like Avi's The True Confessions of Charlotte Doyle are sure to enjoy this fast-paced, exciting tale of murder and adventure on the high seas.  It's also a coming-of-age tale as Ben struggles to understand what his path in life should be.  At 164 pages, this is a quick read that should appeal to reluctant readers as well as any young people looking for an action-filled adventure story.