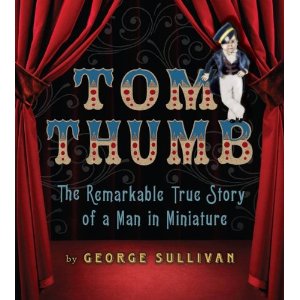 After reading Candace Fleming's Barnum biography earlier this year,  I was happy to have the opportunity to learn more about Tom Thumb, "discovered" and made famous by Barnum himself.  This very accessible biography by George Sullivan, who has written more than 100 non-fiction books for young people, is a fascinating book for children or adults.

Charles Stratton was born in 1838, and was actually over 9 pounds at birth.  But before his first birthday, Charley seemed to have stopped growing.  The doctors were perplexed, since Charley was healthy in all other ways and perfectly proportioned.  Because of his small size and winning personality, Barnum offered to show him at his museum in New York.  Although his mother was initially against the plan, Charley's parents agreed to try it out for a sum of $3 a week.  Not yet five years old, Charley's show business career had begun as General Tom Thumb, a name Barnum chose from English folklore.

Because Tom Thumb and Barnum's lives were so intimiately entwined, the book provides plenty of anecdotes and background about Barnum's life as well as the "freaks" at his museum.  With the extensive archival photographs and original documents, such as the text of one of Tom Thumb's scripts, we are able to easily imagine his shows, in which, among other antics, he sang, danced, and sold kisses to the ladies.  Tom's popularity grew quickly, and before long his salary went up to a princely $25 per week.

Although Tom's exhibition as entertainment may seem distasteful to our twenty-first century sensibilities about people who are "different," the author is careful to put Tom's career in the perspective of the time.  No conventional careers would have been open to Charley other than entertainment, and under Barnum's tutelage he because very wealthy and traveled the world, even performing for Queen Victoria, Prince Albert, and their children.  Background is also provided on dwarves throughout history, explaining how dwarves had a long tradition of serving as entertainers at royal courts and elsewhere.

Readers of this book will see how Barnum fanned the cult of celebrity to maximize his--and Tom Thumb's--profits.  When Tom Thumb married his miniature sweetheart, Lavinia (she was 32 inches tall, and like Tom, perfectly proportioned), it was a huge nationally covered celebrity event.  During the dark days of the Civil War in 1863, The Fairy Wedding, as it was called by the press, rivaled the war for newspaper inches, and police had to put up barricades to handle the crowds waiting to see the bride and groom arrive at the church in New York.  The couple and bridal party were photographed by no less than Matthew Brady, photographer to President Lincoln, and copies of the prints were mass produced as wedding souvenirs.  Tom Thumb, as the author points out, was a true celebrity in a time when there were few, as well as a person who earned respect as an entertainer, not just a curiosity.

This book contains plenty of information for children looking for a biography to read either for pleasure or for a school assignment and would be a great addition to both public and school library collections.  A bibliography, index, and author's notes are included.