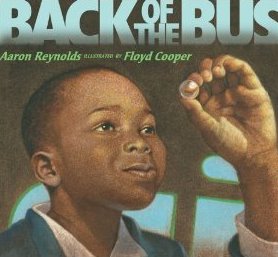 What is more iconic to the Civil Rights movement than the story of Rosa Parks?  In 2010, author Aaron Reynolds, better known for his humorous picture books and graphic novels, takes a more serious turn as he retells the story of Rosa Park's famous bus ride from the perspective of a young boy who happens to be riding the same bus that December day in Montgomery along with his mama.  As the story opens, the boy tells us, "We're sittin' right where we're supposed to--way in back."  He's playing with his tiger's eye marble, letting it roll down the bus straight to Mrs. Parks from the tailor shop, who good-naturedly sends it right on back to him.

But when people pile on the bus, "all crammed in like lima beans," the driver, Mr. Blake, tells the African-American riders to move to the back of the bus.  The boy can't understand why the bus is sitting there stopped, but Mama's got her "crinkled-up somethin's wrong voice," and he wants to know if they've done something wrong.  He finally realizes it's Mrs. Parks who's still sitting up front in the bus, like she belongs there.  Soon the policeman comes, taking Mrs. Parks away in handcuffs, as Mama watches with "the long tired eyes." While his mama says tomorrow "all this'll be forgot," the young boy somehow knows it won't be, and feels "a little strong, Like Mama's chin."

This is a sensitively done take on a familiar incident from history, told from a child's point of view, in a way that makes the subject matter accessible for children to learn from and discuss.  It would be an excellent title for people of all races to check out of the library or purchase to share with their children in order to commemorate not only Mrs. Parks, but the other brave men and women who fought beside her in the Civil Rights movement.  It's also a natural for classroom use, with handsome illustrations by award-winning artist Floyd Cooper that enhance the dramatic elements of the story.  Cooper uses a subdued palette dominated by earth tones, against which stands out the bright yellow of the public bus.  Cooper uses a realistic style with a painterly look, created by a technique called oil wash on board.  According to his on-line biography, he creates a unique look by painting an illustration board with oil paint, then erasing part of the paint with a stretchy eraser.

For more on Rosa Parks, see her official website.

Other recommended books for young people on Rosa Parks and the Montgomery boycott include: