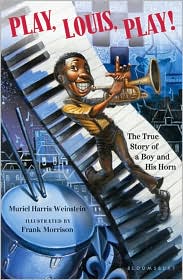 This new biography of jazz great Louis Armstrong tells the story of his childhood from the perspective of his first trumpet, bought from a run-down pawn shop in New Orleans.  This unusual narrator provides a distinctly different point of view in this engaging biography for young children.

Author Weinstein describes Armstrong's very poor childhood in the toughest neighborhood in New Orleans (known as The Battlefield), but notes that Louis never complained; "he said [complaints] hurt his ears as much as a horn's sour notes."  Despite his poverty, Louis had the ability to look on the bright side of life.  From an early age, Louis was known for his huge smile, which everyone said was as wide as an open satchel.  So they called him "Satchelmouth," eventually shortened to Satchmo.

We see Louis introduced to jazz, so fascinated by the pulsing rhythms that he would sneak into clubs and hide under tables to listen to the music.  Although it was clear from an early age that Armstrong had a great gift for music, with his family's poverty, there was no money for an instrument or music lessons.  But when he was about seven, he went to work in the junk business of the Karnofskys, a Russian Jewish family who lived on the edge of the black neighborhood.  The Karnofskys fed Louis, gave him work, and in honor of their kindness, he wore a Star of David necklace his entire life.   According to this book, the Karnofskys loaned Louis money to buy his first cornet, our narrator, the five dollar horn in the pawn shop.

With the need to make money, there was little time for Louis to go to school, and he dropped out in the 5th grade to take up singing with a quartet of boys on a street corner. But when he was 12 years old, Louis was arrested for firing a gun in the air on New Year's Eve, and sent to the Colored Waif's Home for Boys, out in the countryside, a combination orphanage and reform school.  There he had the opportunity to study music and even play in a band, and had clean clothes and three meals a day.  He spent a year and a half there, and when he left, he worked shoveling coal during the day and singing in a quartet and playing cornet after that.  Before long he was discovered and earning a dollar a night to play in a band with King Oliver, who took Armstrong with him later to Chicago.

This book ends as Armstrong is becoming successful and famous, and doesn't deal at all with the later part of his life.  However, an Afterword describes how he was considered the greatest cornet player in the world, and later the greatest trumpet player.  The author describes what made Armstrong special, including his skill at improvisation and his scat singing.  She also points out that despite his lack of formal schooling, Armstrong enjoyed writing and kept journals as well as writing two autobiographies.  The book also includes a glossary of jazz terms and jazz slang, as well as a brief bibliography.

This is an entertaining and interesting book for young readers, although it doesn't strive to give a complete picture of his life, concentrating instead on his colorful childhood in New Orleans.  It also doesn't delve into the more controversial parts of Armstrong's biography, such as his reputation among some in the black community as an "Uncle Tom," or his initial lack of public support for the civil rights movement.

For more on Armstrong, check out the website for his home in New York, now a museum, which offers a complete discography and bibliography on the artist.

An interview with the author about this book can be found at the blog Author Amok.

For other books on the topic, explore some of the following titles:

McDonough, Yona Z.  Who was Louis Armstrong?  (Grosset & Dunlap, 2004).  Part of a series of biographies well-suited to middle grades.

Jenkins, Leonard.  If Only I Had a Horn (Sandpiper, 2002).  Another book concentrating on Satchmo's childhood.
Posted by Fourth Musketeer at 8:32 AM