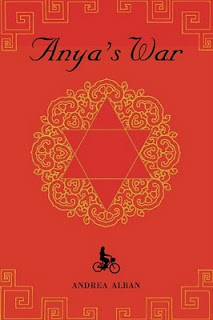 
In her debut novel for young adults, San Francisco writer Andrea Alban mines her own family history to weave a compelling coming-of-age story of a fourteen-year old Russian-Jewish girl and her family in 1937 Shanghai.  Anya and her family had left their comfortable life in Odessa, where Mama was an opera singer and Papa was a journalist, because Papa wouldn't join the Communist Party, and sought safety from the Russian Secret Police in far-off Shanghai, then a safe-haven for many Jews.

The story opens with Anya writing a list of wishes in her diary. Their servant, Li Mei, has told her that planting wishes under a full moon gives them the best chance of coming true.  What does a 14-year old girl in 1937 Shanghai wish for?

She wishes Amelia Earhart, her idol, will be found safe somewhere in the Pacific.  She also struggles with telling her mother the truth about her hopes for the future--going to university in the United States, not becoming an opera singer like her mother.  "I am absolutely, one hundred percent certain that I don't want to sing opera.  I think."  And she's trying to think of something witty to say to a boy she likes at the bowling club, hoping her right bosom will grow extra fast to catch up without her left side, and last but not least, wishing "the Japanese would stop killing Chinese children by accident."

But Anya's life changes when she discovers, on her way home from purchasing the family's food for Sabbath dinner, an abandoned basket with an unwanted newborn girl baby inside.  What should she do?  The baby was thrown away by her family, but Jews don't throw out baby girls, Anya tells herself.  "All girls are precious.  We're all the same." She impulsively decides to take the baby home with her, where she is helped by her best friend, Giselle, and Li Mei.  Will her mother allow her to keep the baby safe?  But Anya soon learns that no place is safe, especially for her new friend Gabriel and his father, who fled anti-semitism in Italy, or even in Shanghai, where unexpected danger lurks.

Alban paints a detailed picture of the exotic Jewish life in Shanghai, from the trip to the kosher butcher to the synagogue to celebrating the Sabbath rituals in their home, with a meal cooked by their Chinese servant.  She writes with great affection for her characters and their hopes and fears, and young readers will readily identify with Anya and her companions.  The author incorporates some romance as well, as Anya dreams about boys and even gets her first (very innocent) kiss.

An author's note explains how Alban grew up hearing stories of her father's Jewish childhood in the French Quarter of Shanghai, China, and how the small community of 4,000 Jews swelled to 20,000 with the influx of Jewish refugees fleeing Hitler.  The Jews that arrived after 1937 were herded by the Japanese invaders into the Hongkew Ghetto, a little-known chapter of Holocaust history.

This book is the first in a trilogy that will go through the end of World War II, and subsequent volumes will tell more about Anya's family and this fascinating chapter in history.

To learn more about Andrea and Anya's War, please make sure to read an interview with the author that will be featured on my blog tomorrow, February 15.


Giveaway:  Macmillan has kindly donated a copy of the book to a lucky reader!  If you'd like to enter, please leave a comment below with your e-mail address.  The winner will be chosen by random number generator on February 20.

I've been wanting to read this book. Please enter me in the contest--beckylevine at ymail dot com.

Please enter me! This one looks so good.
ristaut@gmail.com

I'd love to read this. pragmaticmom.com@gmail.com

I hadn't heard of this ghetto before. I would love to read about her families struggles. It must have been so horrible to live under those conditions. I would like to read the whole series.

This sounds like an awesome book and I'm really sad that I didn't notice your posting about the contest until after it was over. But I'll definitely be adding this book to my wish list!