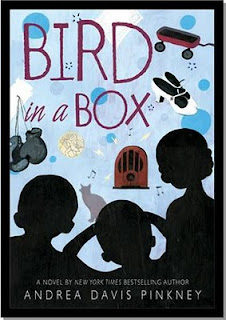 
Set in 1936, at the height of the Great Depression, Bird in the Box is described by the author as "mostly a book about the power of the human spirit, and of how one man's triumph brought glory to so many people."  This moving novel weaves together the story of three different children in Elmira, New York: the sassy Hibernia, the daughter of a reverend, whose mama ran away to New York City right after she was born with dreams of being a jazz singer; Willie, who lives with his abusive, drunk father and his suffering mama while he dreams of being a boxer like his idol Joe Louis; and Otis, an orphan whose parents were killed in a tragic accident, and who keeps their memories alive by remembering his father's riddle-jokes.  All three children idolize Joe Lewis, the Brown Bomber.  As Otis' ma tells him,


"When Joe Louis fights, it's more than just throwing punches, Otis.  That boy's fighting for the pride of Negroes.  When he loses, every colored man loses a little piece of his own pride."

Andrea Pinkney captures the unique voice of each of the three narrators, whose lives converge at the Mercy home for Negro Orphans, where Willie's mother sends him to escape the abuse of his violent fathers.  At Mercy, he becomes friends with Otis, as the two bond over Otis' Philco radio.  Hibernia meets the boys while singing with the church choir at a special holiday performance for the orphans.  A stray cat the boys name Bird joins their ersatz family, and before you know it, they're all gathered by the radio listening to Joe Louis' championship fight. By using actual transcripts from radio broadcasts of Joe Louis' boxing matches, Pinkney provides an immediacy to her descriptions, as we can feel the excitement of the children listening to the matches on the radio.

This book is filled with appealing characters, from the three children to the supporting cast, from the strict Reverend to the kind Lila, who works at the orphanage.  Pinkney skillfully weaves in historical information about Joe Louis, a key figure in African-American history, and as Pinkney describes him in her author's note, "a strong and beautiful symbol of hope."  The author's note includes biographical information on Joe Louis, as well as information on her great-grandfather, an amateur boxer in Elmira, New York, who was the model for the character of Willie in this novel.

For more on Joe Louis for young people, see the following:

I thought I recognized the author! She also wrote "Silent Thunder," a good book despite the discrepancies in historical fact. I put this new one on my wishlist. Thanks for the post!