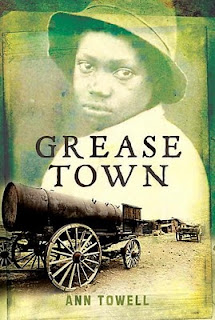 
Curious about what happened to the slaves who ran away to seek freedom in Canada?  Unfortunately, not everything went smoothly for all the runaways who made it to Canada.  In this historical fiction novel for young people, author Ann Towell spins a tale based on a real race riot that took place in 1863.

The story is narrated by Titus, a 12-year old boy who stows away in his older brother's wagon to the Canadian oil fields in Oil Springs, Ontario, around the time of the Civil War.  Titus has been living with his Aunt Sadie and her husband, and he's had just about enough of his aunt's nagging.  When his brother Lemuel plans to leave to go to his Uncle Amos' house at the oil fields, Titus figures it's time for him to have some adventures rather than go to school.  On the road to the oil fields, they meet up with a stranger, John, whom Titus figures is bad news.  "There didn't seem much about him that was honest and true," Titus tells the reader.

With the cover image of a young black boy, I was convinced at first that the narrator, Titus, was black himself.  It took me quite a few pages to figure out that the character we see on the cover is in fact not the narrator, Titus, but rather Moses, a young black boy that Titus befriends when he arrives at Oil Springs.  Moses is the first Negro Titus has ever seen, and he describes his face as a "dark color like the beautiful walnut sideboard Aunt Sadie had in the dining room."  Moses and Titus even start a business together, giving tours of the oil fields to curious folk from the cities.

But the former slaves didn't leave all their troubles behind--some of the oilmen are trying to wreak havoc about the black people working on the oil wells, stirring up trouble by telling people that the blacks are taking jobs away from them by working for less pay.  When their tactics don't work, they stoop even lower to rile up the crowds and drive the blacks out of town.  Titus winds up an eyewitness to the violence.  Can Titus save his friend Moses and his family and help bring the troublemakers to justice?

We learn so little in school about our neighbors to the north that I am always glad to discover a historical novel that explores Canadian history, particularly as it intersects with our own past.  Clearly racism didn't end at the Canadian border, despite the lack of a history of slavery in Canada.  This novel offers an interesting perspective on the Civil War period from the other side of the border, and it's also a moving coming-of-age story about a young man who's forced to confront his fears in order to pursue what's right.


Other blog reviews include:  Ms. Yingling Reads,
Quill and Quire, Good Books and Good Wine, Bookish Blather, The Magic Lasso, Journey of a Bookseller.
Posted by Fourth Musketeer at 5:00 AM