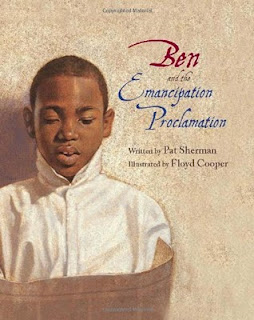 
This stunning picture book for older readers is a great choice to read aloud in class for African-American history month.  Based on the true story of a young slave, Benjamin Holmes, who, despite the odds and the fact that it was against the law, had learned to read.  Ben had learned the alphabet from his father, and when Ben was apprenticed by his master to a tailor in Charleston, he discovers plenty of secret ways to figure out words, whether in the ledger, on boxes in the shop, or in store windows in Charleston.  He even picks up copies of discarded newspapers to teach himself, learning to read about abolition and freedom.  And, encouraged by his mother on a rare trip home to the plantation, Ben teaches himself to write as well.

Although he hid his reading and writing from the whites, it was harder to keep his skills secret from the other slaves.  When war breaks out, Ben is sent to a slave prison, to stay there until sold, where he decides he'd just forget about reading..."it could only lead to trouble."

But one night, the slaves bribe a guard for a copy of the Charleston newspaper, and beg Ben to read it to them.  As Ben begins to read, we read along with him the famous words of Lincoln's Emancipation Declaration:  "All persons held as slaves within any State or designated part of a State, the people whereof shall then be in rebellion against the United States, shall be then, thenceforward, and forever free..."  The author ends the story with Ben peering at the golden light of daybreak through the slats of the shed...wondering what this new freedom would look like.

This book would not be nearly as effective without the handsome illustrations of illustrator Floyd Cooper, using his signature oil on board technique.  His illustrations have an old-fashioned quality that makes use of warm earth tones, reminding the viewer of sepia-toned photographs of the time period.  The two-page spread of Ben reading the Emancipation Declaration is particularly striking in its dramatic simplicity, as Ben is presented in a head and shoulders perspective, reading the newspaper, while the other slaves are seen only in shadow.

An Author's Note with brief biographical information about Benjamin Holmes follows, in which we learn that after the war he attended Fisk University, where he became a member of their Jubilee Singers, touring throughout America and Europe, as well as becoming a teacher.  Additional resources, both books and websites, are also listed.