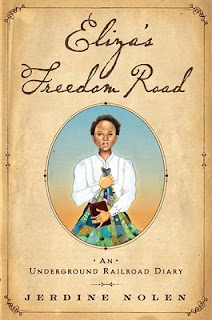 
In her first novel for middle grade readers, author Jerdine Nolen presents a fictional diary of a 12-year old slave in Alexandria, Virginia, in 1854, as she escapes to freedom in Canada through the help of the Underground Railroad.  Much like Scholastic's Dear America series, the story is told in diary entries that take place over the course of a year.

Eliza is not an ordinary slave; at a time when it was against the law for slaves to learn to read and write, she was taught by her mistress to do so.  But it is not her mistress but fellow house slave Abbey who gives Eliza the unused diary Mistress had thrown away, along with two lead pencils.  But she knows she must write in it in secret, far from the eyes of Sir, the plantation's cruel owner.  Eliza's mother has been sold away, leaving her with only her memories and a beloved story quilt to remember her by.  This quilt has twelve panels, each symbolizing a different story her mother loved to tell, including two blank squares, for Eliza to quilt her own stories on.  Eliza's own narrative is peppered with her mother's stories, some of which have African roots, others coming from the Bible.

Because she reads the newspaper to her nearly-blind Mistress, Eliza is more aware than most slaves of the unrest in the country over slavery, and learns through the paper about the underground railroad.  She wonders what that could be.  "Do they mean departure by an underground railroad train?  Is there a way they escaped on a train that runs under the ground?  I want to know how to find that train station.  I want to know how to get three tickets:  one for Abbey, one for Mama, one for me."

When Eliza is sent with her mistress to "Mary's Land," she meets Harriet Tubman, who one of the other slaves tells Eliza is the Moses of their people, coming back to show others the way to freedom.  Be ready in the spring, they tell her, when Miss Harriet will be back.  But when she finds out Sir is coming to take them back home, she knows she can't delay any longer; she must go north to freedom.

The diary chronicles Eliza's journey on the Underground Railroad, and how she used markers and the North Star to find her way from safe house to safe house.  Although the happy ending that awaits Eliza in Canada seems a bit forced, the book is likely to be popular with young readers looking for historical titles.  There is plenty of suspense as Eliza makes her way north, and the author does an excellent job capturing Eliza's voice and her everyday life as a slave before she runs away.

An author's note explains that the book started as a collection of her favorite stories and folktales, and she was subsequently inspired to add the voice of young Eliza, the storyteller.  She also mentions Canterbury Tales as a source of inspiration as well.

The book includes a bibliography of related books and websites.

Check out other blog reviews at Fuse #8, Tutu's Two Cents, Kirkus, and Journey of a Bookseller,

Read an excerpt from the book here.
Posted by Fourth Musketeer at 5:00 AM

Looks like an interesting read. My town, Newton in MA, was a stop in the underground railroad. Our historical society is based in a house that helped slaves escape and we got to see where they hid them in the basement in a large sort of indoor well (dry, of course).