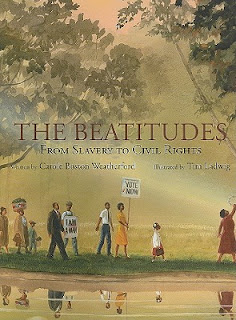 Recommended for ages 8 through adult.


This inspiring picture book for all ages uses the Beatitudes--the famous lines that begin Jesus' Sermon on the Mount--as the background for a trip through African-American history, particularly as faith has influenced the quest for freedom and equal rights through different eras.  Award-winning author Carole Boston Weatherford uses free verse text to describe God's omnipresent role throughout the long struggle, beginning with the voyage on slave ships to America and ending with Barack Obama taking the presidential oath.

Here's an example of her moving verse:

I was with the U.S. Colored Troops
who fought to end slavery during the Civil War.
I beat the drum for freedom.

I was with Booker T. Washington
and Mary McLeod Bethune, who built colleges
and lit the way for young minds.
I was the lamp.

Carole Boston Weatherford's text is enhanced by stirring watercolor and pastel illustrations by Tim Ladwig, who is both an artist and minister and has illustrated other picture books with biblical texts.  In The Beatitudes, he depicts both famous individuals and ordinary African-Americans with the same dignity, and many of the illustrations are infused with a beautiful golden light.   At the conclusion of the book are brief biographical profiles of the famous African-Americans mentioned in the text, including Ruby Bridges, Rosa Parks, Martin Luther King, Emmett Till, Marian Anderson, Harriet Tubman, and Barack Obama.

This is a beautiful volume for any home or public library, and can be enjoyed by readers of any race or religious faith.
Posted by Fourth Musketeer at 5:00 AM

This looks stuning - thanks for sharing Margo.