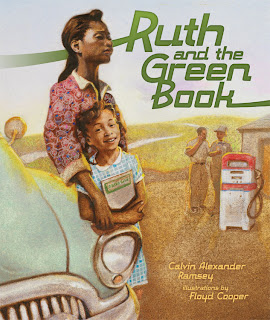 In this story, beautifully illustrated by Floyd Cooper's nostalgic, almost sepia-toned paintings, young Ruth is so excited when Daddy comes home with their very own automobile--a shiny green Buick, that Daddy will use for work but also for them to take a trip from their home in Chicago to her grandma's home in Alabama.  When they eventually stop for gas on the way, Ruth and her Mama have to relieve themselves in the bushes, because the restrooms were for whites only.  And when they stop in a hotel with plenty of vacancies, they are refused a room, and are forced to drive through the night instead.

Ruth overhears her daddy talking about someone named Jim Crow, but then finds out that Jim Crow "wasn't a who.  It was a bunch of ugly laws forbidding blacks and whites from mixing in any way."  Ruth finds this hard to understand, and her feelings are hurt to be so unwelcome.  Isn't our money just as good, she wonders.

But at an Esso station they learn about The Negro Motorist Green Book, started by a postman named Victor Green to help black people out who were traveling by car.  Like today's AAA guides, it listed places around the country to eat, stay, shop, and visit--but in this case places that would welcome African-American travelers.  With the guide, Ruth's family finds inns that welcomed them, and other African-Americans, including traveling salesmen, who depended on the Green Book to do their jobs.

This picture book highlights just one aspect of the Jim Crow laws, but in a compelling way, from a child's point of view, in a manner that makes the racism of the time more accessible to a young person's level of understanding.  This is an excellent title for starting or enhancing a discussion of civil rights either at home or in the classroom.  The book was recognized by ALA as a Notable Children's Book from 2010.

For more information related to this title, see the book's website:  ruthandthegreenbook.com, where you can download discussion questions and other curricular materials, including the an original Green Book from the 1950's.
Posted by Fourth Musketeer at 5:00 AM

Rescue at Pine Ridge is the story of the rescue of the famed 7th Cavalry by the 9th Cavalry Buffalo Soldiers. The 7th got their butts in a sling again after the Little Big Horn Massacre, fourteen years later, the day after the Wounded Knee Massacre. If it wasn't for the 9th Buffalo Soldiers, there would of been a second massacre of the 7th Cavalry. This story is about, brutality, compassion, reprisal, bravery, heroism and gallantry.

Visit our Alpha Wolf Production website at: alphawolfprods.com and see our other productions, like Stagecoach Mary, the first Black Woman to deliver mail for the US Postal System in Montana, in the 1890's, spread the word.